Books are her companion. Words are her strength. Poetry is her form of expression.

CHENNAI: Books are her companion. Words are her strength. Poetry is her form of expression. Kaanthal Manikandan, a 14-year-old passionate writer, used the lockdown to do something she loves — write poems.

She compiled about 20 of them into a book The See-Saw Souls, which was published on September 17. The poems, which are inspired from real-life experiences, include issues such as anti-bullying, the pandemic, complexities of the human mind, and some philosophical and thought-provoking topics. “I’ve been writing since the age of seven.

My parents introduced me to wonderful writers. I voraciously read Robert Frost, Walt Whitman, and Emily Dickinson. Shakespeare has been my latest addiction. I’ve been reciting his sonnets religiously during the lockdown. Poet Bharathiyar is also an inspiration,” says Kaanthal, a Class 10 student of Church Park. The book begins with the poem The Cure that talks about how the planet heals as humanity watches through a windowpane during the lockdown.

Another one, The Unique Mind lays emphasis on how an event of bullying can inflict a permanent scar in the victim’s heart. The Humblest Wonder, which is on the magnificence of the moon, is my favourite. Kaanthal’s flair for the language reflects in her cohesive writing, simple choice of words and heartfelt verses. “I love Shakespeare’s sonnets so much that I have attempted a sonnet with an iambic perimeter in the book. Growing up, I’ve also enjoyed Roald Dahl’s limerick. I want to try that style. I love toying around with figures of speech. 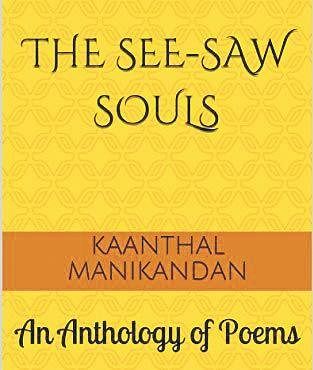 That way, English class at school has been of huge help in getting the basics right. I like poetry more than writing stories because it’s special. The lines may be limited but you get an in-depth meaning. It’s not for all,” says Kaanthal. An able orator, she has bagged several accolades in oratorical competitions and debates. She has a penchant for theatre and painting, too, and spends her free time reciting poems. Kaanthal has self-published the book with Amazon Kindle Direct Publishing. “Right from compiling, editing to designing my cover, I was involved throughout the process.

It has given me a holistic experience and satisfaction. I’m usually my biggest critic. I’ve received encouraging feedback from well-wishers and it has motivated me to write more. I’m not interested in sharing my work on social media platforms. Somehow I’m more of an oldschool in this aspect,” says Kaanthal, who’s currently working on a fiction novel. ‘The See-Saw Souls’ is available on Amazon for `199 in paperback and e-book format.

Pick it up
Name: The See-Saw Souls

Now we are on Telegram too. Follow us for updates
TAGS
Kaanthal Manikandan