A slice of home, delivered

The pandemic pressed pause on life as we knew it, but it also birthed enterprising home chefs, who found love in catering regional specialities

CHENNAI: It’s lunchtime. On a mundane weekday, it’s food that has me excited. I eagerly track my order as it makes its way to me from the home chef who has become my favourite. Once here, the strong aroma of butter chicken — neatly packed in ecofriendly boxes — fills the room. As I unwrap the foil paper, I find the rotis greased with ghee. The mint chutney and pickled onions complete the meal.

A personal note that reads “Just the way you like it” and pinned to the brown bag works just as well as any “I love you!” For that’s what you are assured in this exchange with home chefs right? A slice of home and some personal kindness — even if it’s a ‘standard text’ note. Amid the chaos of the pandemic, home chefs have managed to keep us fed and contribute to morale like never before.

Even when the restaurant industry and successful businesses were forced to pause, it was home chefs — with no institutional degree or financial backing — who kept the show going, banking on just instincts and personal experience. Some for passion, and others for survival; from changing their priorities and addressing hygiene concerns to curating new menus and reinventing sales strategies, they have been doing it all. CE catches up with eight enterprising home chefs who have been whipping up regional cuisines in kitchens birthed by the pandemic.

DILLI KANTEEN
Mira Srinivasan had always envisioned starting a little kitchen project. It wasn’t till two months into the lockdown, when the workfrom- home routine seemed to suck away all pleasure from life, that she got to put her foot down and embark on the passion plan. Dilli Kanteen became a reality in early August — born out of her love for north Indian cuisine. She rolls out the day’s menu on her Instagram page Mylapore Filter Coffee and it gets sold within hours. Rajma chawal, parathas, langar wali dal, bedmi poori with aloo — name it and she will get them delivered with mint chutney and pickled onions, just like in a dhaba. “Growing up in Delhi and tasting all kinds of street food, I was confident about pulling o f f the local flavours. We had multiple dry-runs with friends and family. Now, there’s been a good response from across age groups, especially from those who’ve been craving authentic Delhi food. While I do the cooking, my husband handles the packaging and coordinates with Dunzo,” says the Thiruvanmiyur resident. She wears a mask and gloves, and cleans the kitchen twice. Mira prepares lunch or dinner every alternate day. She hopes to include breakfast options soon.

RABIA B FOOD
With the goal of carrying forward the culinary legacy of Ambur, co-sisters Amrin, Nazeena, and Nazira opened their kitchen — named after Nazeena’s grandmother Rabia B — in August. What started with a small snacks menu developed into a full-fledged offering with starter, curry, main dish, and dessert options. The menu is made available on Instagram. The recipes are that of Nazeena’s grandmother. “Nobody goes to Ambur and returns without devouring a plateful of mutton biryani. We wanted our patrons to taste some of the close-guarded recipes. Looks like there’s demand,” say the Kilpauk residents. Their gulab jamun and kheer are big hits. “Our flaky samosa with non-veg filling is a win. Social media platforms have been really helpful in promoting our business,” says Nazeena. The kitchen caters to bulk and party orders. They deliver across the city through Dunzo. The menu is standard.

NAAVAAI VIRUNDHU
The city has a soft spot for seafood, courtesy its coastline and fresh-off-the-hook options. There’s something irresistible about a seasonal fish marinated in the tangy hot and spicy mixture and fried over a seasoned cast iron skillet or a piping hot fish kuzhambu served with steamed rice. Thanks to Naavaai Virundhu, all this is possible from the comfort of your home. Friends Gita Ganesh and Roselin Libiya have attempted to deliver Ramanathapuram cuisine. Their kitchen started accepting orders from last week. “We have tried and tested four menus. Unlike Chettinadu or Kongu cuisine, Ramanathapuram food is not popular in the city. The flavours are distinct and the seafood is freshly procured for the day. For instance, the kuzhambu has less of coconut and is less sour compared to the conventional ones,” reveals Gita, who handles the marketing while Roselin does the cooking in her house in Manapakkam. The kitchen offers a full meal, comprising traditional dishes of squid, prawn, fish, crab (predominantly seafood). The masalas are hand-pound and the oil, cold-pressed. “With relaxations, we will be offering a new menu twice a week. People trust us because we cook the same food for our families. The ingredients and hygiene are looked after. It’s a sizable menu at an affordable price,” assures Gita. The kitchen has tied up with a third-party for delivery. The menu is rolled out on their Instagram page Naavaai Virundhu. SRIHARI FOODS
Birthdays, family functions, parties...what started as customised catering on a small-scale expanded
into a full-fledged venture for Sudha R in 2017. She began catering to three different schools in the city. When schools shut doors in early March, she moved her kitchen to her home. “We stay near SBOA school in Anna Nagar. For two months, we only catered to students and working professionals, who were stuck in their hostels and PGs in our locality. Eventually, takeaway options got convenient with Dunzo,” says Padma Priya R, Sudha’s daughter. The day’s lunch and dinner menu are sent on WhatsApp the previous night. Sudha insists on using hand-pound masalas and cold-pressed oil for her cooking. South Indian delicacies like sura puttu, prawn thokku and mutton kuzhambu are popular. “We
recently started delivering snacks like cutlet, sandwiches, and kuzhipaniyaram. My mother handles the kitchen. It may not be steady income like before but something is better than nothing,” says Priya.
Bulk orders are accepted four or five days prior to delivery.

AAKAARIYAA
With increasing demand but limited takeaway options in the city, Aakaariyaa — run by holistic health coach Deepali Nichani — offers heaven in a bag for the city’s vegan community. Deepali offers a standard menu and weekly specials for people to choose from. Based out of Chennai central, she delivers to people across the city through Swiggy, Dunzo, and Task Hopper services. “I’ve recreated a vegan alternative to every commonly available delicacy. Even mac and cheese and the cheesiest of pizzas have replicated vegan cheese. Ours is the first completely vegan cloud kitchen in the city,” says Deepali. Her dessert menu is equally tempting with options such as salted dark chocolate tart, tiramisu cupcakes and sweet potato brownies. The dairy alternatives extracted from soy and cashew milk is prepared from scratch at home. Deepali also retails vegan cheese, dips, sauces, nut butter, and vegan oat milk. “I also provide health coaching to my patrons in terms of planning their diet,” she adds.

JOY’S WEEKEND INDULGENCE
It’s been only a year and a half since Joydrita Ragavendran Chatterjee moved to Chennai but her Bengali food inspired plenty of love soon after. It was her flair for hosting memorable dinners for friends and family in Mumbai that got her into the world of catering. “I had plenty of time in hand after moving to Chennai and so started catering to daily meal orders. I’ve hosted pop-up tables at my house and in restaurants. Everything came to a standstill with the pandemic,” narrates the Velachery resident. Yet, she could sit tight for only so long; Joydrita started Joy’s Weekend Indulgence soon after restaurants reopened for takeaways. Doi murgi, chingri bhapa, kosha mangsho and more became household names. “There aren’t many Bengali joints in the city. People also have a common misconception that we use mustard in everything and only eat seafood. I’ve included vegetarian options to bust the myth. Thankfully, I have my pantry stocked with ingredients sourced from Bengal. If we can all uphold the recipes of our mothers and grandparents and pass it on to the world, then nothing like it,” says Joy, who uploads her menu on her Instagram page Tales of a Glutton, and on WhatsApp. She delivers to a limited number of 20 per menu, on a first-come-first served basis. The menu changes once or twice a week. 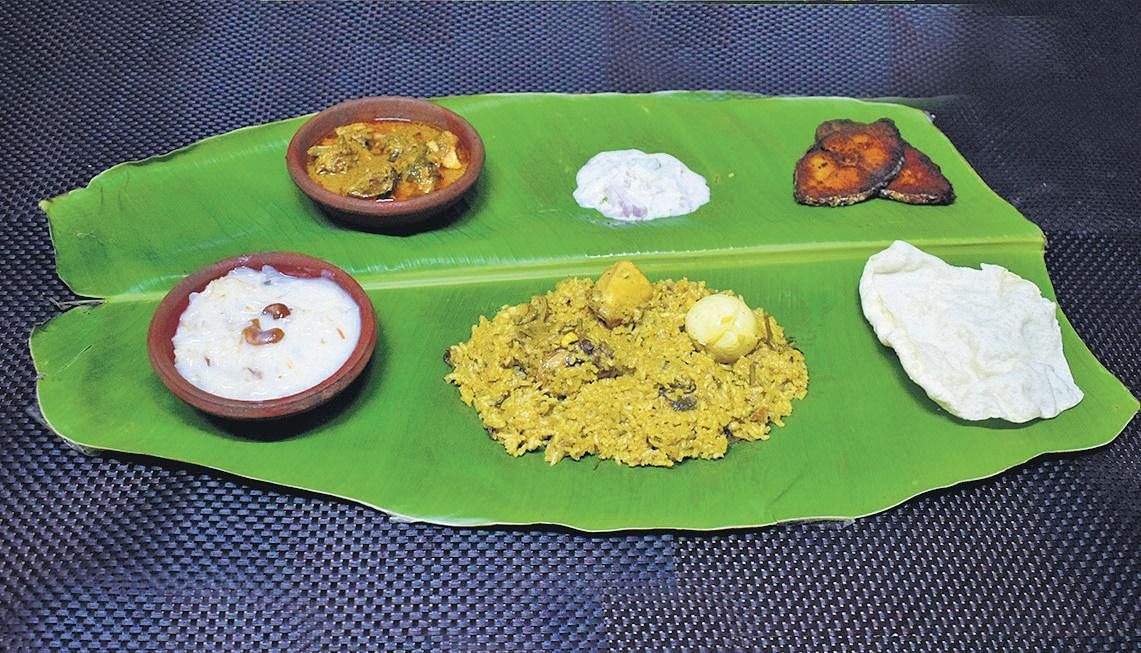 ATHERS KITCHEN
Najla Ahmed saw the lockdown as the perfect time to set up a food business and dedicate it to her mother — right from the name. Since its inception on June 16, Ather has been doling out Mughal and Mediterannean staples from their house in Gopalapuram. “The kitchen has been the major source of income. Mom does the cooking, dad helps with cleaning, peeling, and chopping, and I manage the social media marketing. Mom was, earlier, into small-scale catering for party orders but it turned into full-time business since the lockdown,” says Najla. Mutton mandi, chicken majboos, tandoori chicken, shami and samosas have been going out in repeat orders. “I grew up in Kuwait. Mom would go restauranthopping or try out the street food. She had the knack of replicating the same at home. She knows the middle-eastern cuisine inside out. It’s encouraging to see many home chefs trying to generate income with what they know. We support each other instead of seeing it as a competitive market. My friend Farhana has been a huge support,” asserts Najla. The menu is standard and put out on their Instagram page.

YEP’S NAGA KITCHEN
I t is as early as 10 am on a regular weekday and there’s already batches of pork and chicken momos ready to go at this home kitchen in Palavakkam. A batch of pork bamboo shoot curry is closer to completion. Kivikali Yetthomi has stopped taking orders for the day. It’s been only a month since Yep’s
Naga Kitchen was set up and Kivi’s limited menu is already going places. Kivi quit her teaching job just before the lockdown to pursue cooking full-time. Coming from the land of festivals and food, it’s been Kivi’s passion to take their home cuisine to the outside world. “Eateries serving northeastern food
in the city is limited. Right from ghost pepper to Naga king chilli, everything is freshly sourced from Assam. They sustain for a long period and are stocked in my pantry. Authenticity is what sets us apart,” says Kivi. She belongs to the Sumi tribe — one of the 16 native tribes of Nagaland. “There’s lots of food that holds cultural significance. For instance, axone is our staple. People got to know about it only from the film. There’s so much that the cuisine has got to offer. It’s an acquired taste and I’m glad that there are takers for it in this city,” says Kivi, whose beef pickle is much sought-after. She delivers through Dunzo to all parts of the city. She plans to add Goan sausages and cutlet to the menu soon.