CHENNAI: One minute he’s kneading the dough, the next minute he’s blanching tomatoes. If you haven’t figured out what’s cooking in his kitchen yet, know that a 12-year-old is prepping a thin-crust pizza, made from scratch in his kitchen. Meet Afnaan Ahmed, the little chef who’s wholesome pizzas and comforting Mexican coffee buns have been the murmurs of many a happy heart ( and tummy) i n Nungambakkam. Afnaan’s Kitchen, his quarantine venture, kicked off this June, thanks to his undying love for this Italian staple. 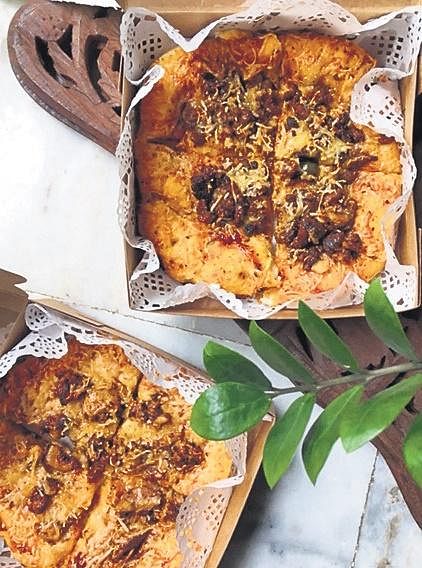 All it took was a few sprinkles of encouragement from his parents. “I started making pizzas a year ago. In my initial trials, I used a readymade pizza base. But I always found it to be too thick. In my fourth attempt, I decided to make the base and sauce from scratch. Unfortunately, I miscalculated the portions of the ingredients, and the dough didn’t cook well. I wasn’t too disappointed because it was only a matter of practice after that,” says Afnaan.

A pizza fanatic, Afnaan made pizzas after school, almost every day. Eventually, he moved from using basic veggies to including meat as topping. “I began experimenting with mutton and chicken. With my mother’s help, I understood the appropriate marinades that I can create to cook the meat in. I even mixed various masalas to come up with the right marinade to suit the pizza flavours that I was working with,” he shares. It was one glorious day when Afnaan served his cousin sister a mutton-topped pizza that she suggested he take his passion down the commercial route.

His mother supported him by offering some space in her kitchen, and helping him chalk out the pricing for his menu. “Afnaan began making amazing omelettes at the age of eight. He picked up the simple recipe and introduced additions of his own. Sometimes, he would add vegetables and sometimes, he would add cheese,” says Afnaan’s mother Farah Ahmad. No wonder then Afnaan’s favourite dish to cook, he says is, “Omelettes”.

But cooking up a storm in the kitchen hasn’t been a cakewalk while managing school hours. Yet, Afnaan strives to achieve both —he attends three hours of school, from 8 am to 10 am, and spends the remaining hours of the day completing his homework, baking, experimenting and learning new recipes on the Internet. “We had started catering to relatives and friends by early January this year. At the time, I could only have pizzas on the menu. We had both veg and non-veg pizzas, and used toppings like chicken, mutton, spinach, mushroom, capsicum and paneer.

My mother helped me promote the business on Instagram. The inflow orders have been increasing since then,” says Afnaan, who gets one to eight orders every day. One look at the comments on his Instagram page reveals the praise from his customers. His mutton pizza, we hear, is a bestseller. “I generally keep all the toppings chopped and ready, just after I finish school. Making the dough and sauce is the time-consuming part,” he says, adding that he always has a ball of dough in his fridge and a bowl of pizza sauce, ready-to-go.

“The boy loves to present the dishes in an innovative way. He follows a bunch of You- Tube channels but his biggest inspiration is chef Alvin Leung from MasterChef Canada. It was after watching the show that he wanted to expand his menu to include breads and cakes,” says Farah. For now, Afnaan’s menu includes pizzas and coffee buns. “If I get good customer responses for the coffee buns, I may start selling other desserts as well,” he says, speaking about the coffee buns that were introduced only in August. The pizzas are priced between `175-`350. The Mexican coffee bun costs `80 (per bun). Orders can be placed via his Instagram page @afnaanskitchen, or by phone at 7358743890.

More in the making, says the little chef
For now, Afnaan’s menu includes pizzas and coffee buns. “If I get good customer responses for the coffee buns, I may start selling other desserts as well,” he says, speaking about the coffee buns that were introduced only in August.