With faith in their prayer and joy in their heart, Bengali associations and members of the community
prepare to welcome Goddess Durga home, assuring safe and sustainable virtual celebrations

CHENNAI: The scent of pushpanjali and parijat flowers, the rhythmic recital of dhaks accompanied by the dhunuchi dance and the synchroni sed chanting of mantras permeate the air filled with the fragrance of earthy dhoop — for it’s that time of the year when the little Bengal in Chennai comes alive. With grand decorations, sumptuous bhog and magnificent idols of Goddess Durga, the city revels in Pujo festivities that are often considered a marker of social concourse. But, with the COVID-19 pandemic shadow over the annual celebrations, the usual joyous preparations for Pujo seem to carry a tad sombre mood. 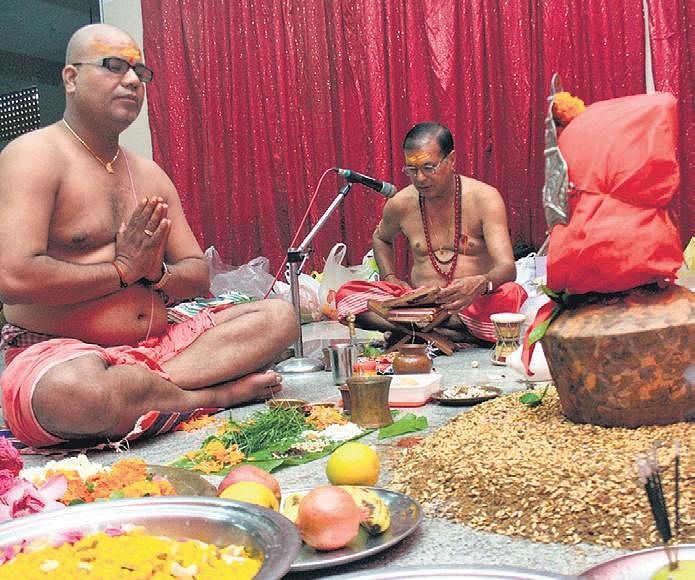 Downsizing idols
Like many other seasonal businesses, the virus has robbed the artisans of their livelihood. Rinku Pal and his four men are among the many idol makers who come to Chennai during every Pujo and reside in the Madras Kali Bari Temple. A native of Kolkata’s Diamond Harbour, Rinku is the third-generation of idol-makers, who rely solely on this profession to make their ends meet.

Carrying forward the legacy left by his father Kishori Pal, who visited the city for Pujo since 1982, he says, “We usually come four months before Durga Puja. We get busy with Vishwakarma Puja and Ganesh Chathurthi. But, things have been extremely difficult this year. We came only in September. Work is happening at a slow pace, orders are limited and we had a hard time procuring raw materials.” It’s been a washout year for most festivals, spelling financial disaster for Rinku and his ilk.

Orders for Durga idols have trickled down from 30 to 12, and the size has shrunken from the standard five feet to two or four. “We sell the idols as a complete set comprising Goddess Durga along with Lord Ganesha, Lord Kartikeya, and Goddesses Lakshmi and Saraswati. Each idol takes several hours to dry. Overall, a set takes 20 days to complete. Clay is expensive in Chennai, so we bring it from the banks of Ganga river and mix it with the red soil here to get a smooth finish. Once the idol is ready, we paint and decorate it. Each set is priced from Rs 40,000,” explains Rinku.

Low-key festivities
Not just Rinku, other artists who look forward to Pujo for making money are equally bearing the brunt. Like the dhakis who come down from the suburbs of Kolkata to entertain people here. Durga Puja is a festival that is incomplete without the rhythmic beats of dhak, the cylindrical, barrelshaped traditional instrument. Suspended from the neck, the instrument is played with a wooden stick. The sound is said to please Goddess Durga.

People dance to the beats along with dhakis dressed in colourful kurtas and starched dhotis. “Dhak is an important part of all pujas. Since we don’t have a clear picture of the function yet, we’re contemplating whether or not to bring the dhakis. It’s also not possible to arrange for local players because they cannot match the beats. It’s an art,” explains Soumya Guha Thakurta, secretary, The Bengal Association T Nagar. Dance, drama, competitions...Pujo usually has a line-up of exciting activities for patrons.

“Kids perform in plays. Ladies begin rehearsals for their dance performances at respective houses months before the puja. Theatre artistes begin with their drama production. Everything has taken a backseat and recorded videos will be made available online on official social media pages of the associations for people. Bengalis love art and literature, and Pujo has been a great opportunity to showcase our talent,” says Prakalapa Bhattacharya, who has been a priest for the past 20 years and is an active member of various associations. He also writes scripts and takes part in drama with his son. 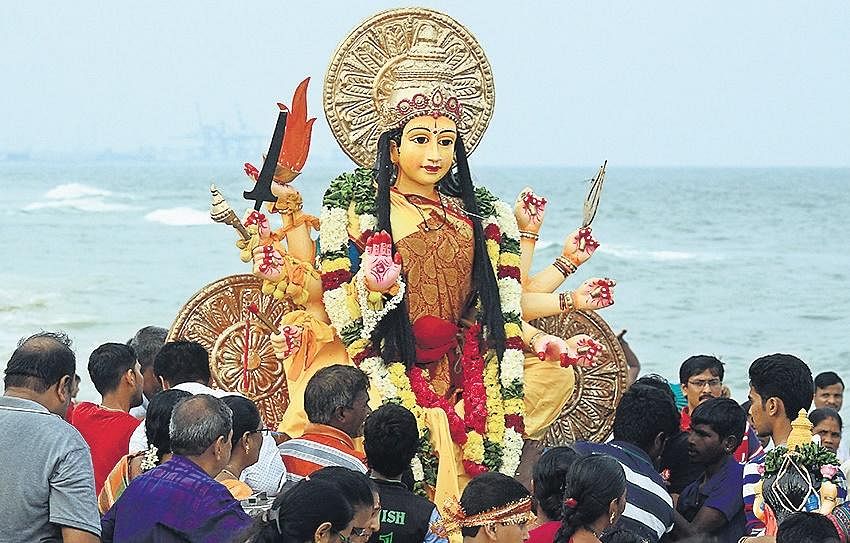 A safe celebration
Despite the gloom, Bengalis in the city are leaving no stone unturned to welcome their Ma. Preparations have commenced in full swing by following all safety measures. “We have been posting updates regarding the puja on our official Facebook pages and WhatsApp groups. The executive members are divided on the opinion as to how much one can compromise (on safety). Our members are our responsibility and every association has its set of hygiene protocols in place,” asserts Jaypal Menon, secretary, DCPCA, Shollinganallur.

While social distancing is antithetical to the idea of a festival, the Madras Kali Bari Temple in West Mambalam, which will be celebrating the 53rd Durga Puja, understands the repercussions if it is not followed. “We’ll avoid many of the public rituals like sprinkling of the holy water or giving flowers to the devotees. We will follow the government-issued SOP,” assures Pallab Sinha, the temple secretary.

Others like Besant Nagar’s South Madras Cultural Association will hire a huge auditorium, as usual, even as they await government orders to plan the scale of celebrations. The Dakshini Society in Anna Nagar too is expected to follow the new norms — from social distancing and crowd control to temperature check — laid down by the Central and state governments, says its secretary Mukul Dasgupta. But the show must go on, they believe.

A digital makeover
Rituals, pujas and darshans will be broadcast on social media channels, bringing the community together even as they remain distant. The-five day celebrations, which begin with Maha Sashti on October 22 and end with Bijaya Dashami on October 26, will not lose its significance, the associations assure. A formal invitation comprising the list of events is being circulated on social media groups to its members. “Sashti, Saptami, Ashtami, Nabami and Dashami.

I will be performing puja on all days at The Bengali Association in T Nagar. As of now, we plan to livestream for people to take part from home with their families. They can perform their pujas on a small-scale by reciting the mantras. This will also be helpful to Bengalis living abroad,” shares Prakalpa.

The feast comes first
But even a pandemic cannot take away the spirit of bonhomie that comes with bhog. To keep their members’ prayer and palate satiated, associations have been brainstorming ways to ensure bhog is delivered at their doorstep. “Bengalis love their food, especially bhog. It is usually served to the guests in an authentic sit-down manner. This custom is said to bring people together regardless of their social strata. Usually, we bring chefs from Bengal, but this year, it will be prepared by cooks from Chennai. The modality of food delivery is not decided,” says Soumya.

Echoing a similar approach, the Korattur Pooja Association, Dakshini Society, South Madras Cultural Association, Madras Kali Bari Temple, DCPCA and other associations will be offering prashadam and bhog in takeaway style to keep people from gathering at the venue. The Madras Kali Bari Temple and The Bengali Association will continue their annual annadhanam for the underprivileged children. The regular food stalls will be out of the roaster, given the risks it brings in. “Pandal-hoppers eagerly look forward to the food stalls serving staples ranging from egg rolls to flavoured roshogulla.

The beauty is that both vegetarian and non-vegetarian food is served. These are the five days when we don’t cook at home because there’s a never-ending list of items we’d get to try. Bengalis crave authentic cuisine, which isn’t available in many restaurants. This is the only change to savour everything under one roof. Home chefs also get to make money out of it. This would’ve been a great platform for small-scale businesses,” rues Prakalpa.

A puja like never before
Despite adopting these sensible solutions, there is much to yearn for in this year’s celebrations, it seems. For Sangeetha Dey, gathering at the puja, sitting and talking for hours with friends she would be meeting after months, dressing up for the occasion — these are the things she would miss. “I don’t know how I’ll be able to wear a sari and sit in front of a mobile or laptop. So maybe we’ll visit the puja venue once or twice; we can probably just see it from outside.

We can, perhaps, call a few other close friends and go to the beach,” she shares. With other associations in the city having their plans, they might visit their puja too, adds the member of SMCA. Prakalpa is pleased by the increase in the number of places that have started to celebrate Durga Puja. “Last year, 50 places in the city performed Pujo. Even educational institutions made it a gala affair. Our members would go on a trip around the city to different places to meetand- greet. It upholds our Bengali sentiments and evokes the nostalgia of home.

The immersion of idols in Palavakkam beach is another beautiful sight one wouldn’t want to miss,” he reminisces. Pallab feels that beyond all these practical problems, it is the human side of the celebrations that they will miss the most this year. “Durga Puja is more of a social festival than a religious one. People get to meet each other for three-four days, go out and offer their prayers together and linger — just to mingle and savour the atmosphere. We have the dhak. This time, our regular dhaki is not coming. So, we’re trying to get somebody else.

This will also be a part of the festivities. But the atmosphere that is created would be missing this time. In our temple, we would have more than 1,500 people visiting per day every year. That, we will miss. Besides, given the monetary or human losses many have suffered, not many would be in the celebratory mood either. That’s the reason they have cut down on the festivities,” he shares. The overall idea is to not break the chain of having celebrated the festival for over two decades, says Mukul.

“We want to do this puja because we are emotionally attached to the festival. But, at the same time, safety is very important; we will not compromise anything in this regard,” he concludes. Pinning their hopes on the goddess, the members plan to wait till October first week to get a clear picture with unlock 5.0 guidelines. Will mother Durga slay ‘Coronasura’? Only time will tell.

Now we are on Telegram too. Follow us for updates
TAGS
Durga pujo COVID 19 Chennai