Spinning the wheels of hope

As post-pandemic Pongal remains bleak for prosperity and prospects, potters in the state find themselves hanging onto the slimmest threads of business to tide through the testing times

CHENNAI: Bright red, yellow and green stripes run through the fresh, white top paint coating of about two dozen clay pots. Neatly stacked on the ground along a bylane at Thiruverkaadu, the pots, creations of 60-year-old Perumal, wait for its first buyer of the day. But, on most days, there are hardly any buyers, tells the sexagenarian, a former resident of Kosapet, who moved to Thiruverkaadu in the early 2000s.

“I am from Kosapet’s Kuyavar (potter) community. However, due to lack of opportunities there, like many other families that migrated to other parts of the city and state, I too came here. While I have seen better days, especially during Navaratri, Vinayaga Chathurthi, Krishna Jayanthi and Pongal, last year and this year, owing to the pandemic, sales have lacked lustre,” shares the master artisan, who has been in the trade for over four decades. “I learned to make these pots by observing my ayya (father).

He didn’t need help in sourcing the clay, making the pots or baking it. He made pots till his last breath. Though we have seen hardships in sales during calamities, the pandemic has pushed us into an abyss,” he says. Until 2020, around the Pongal season (between December and January), Perumal and his ilk in places including Thiruverkaadu, Mambakkam and Thiruvallur, used to earn Rs 8,000-Rs 10,000 a month (selling each pot for Rs 80 to Rs 90).

Now, it has plummeted to just a few hundreds. “My son works for a transportation company and it is with his earnings that we have been able to handle our daily expenses. While he knows the art of making pots, I don’t think he will make this his profession owing to its lack of job security,” he shares. 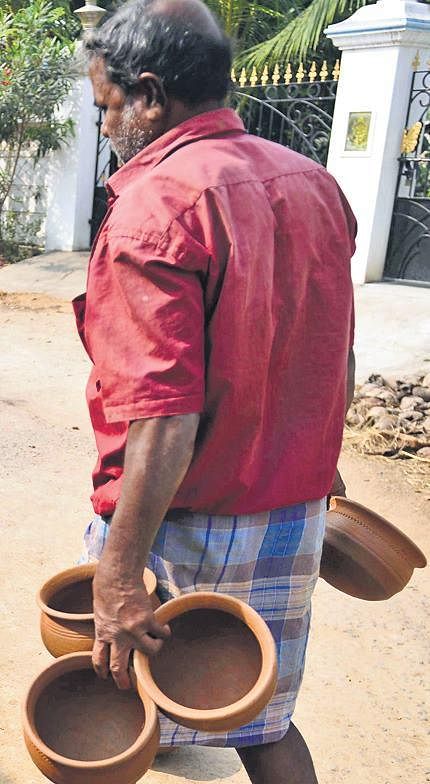 Plagued by uncertainty
Shenbagam P, a fourth-generation potter-cum-tailor from Thirumazhisai agrees. “My family has been in the trade of pot-making for several decades now. While growing up, I have seen my mother and father toil over the wheel to create the clay pots. My earliest memories of the Pongal festival is of a market full of people purchasing sweet sugarcane stalks, banana leaves, koora poo and avaram poo and the humble man paanai (clay pots). ‘Appa and amma earn a lot’ I used to think.

Now that I’ve grown up, I wonder how they managed to buy us new clothes and sweets for the festival with that meagre income,” she says. What the potters earn in a month, especially during a time like this pandemic, is definitely not enough to sustain a livelihood, she points. “A few years ago, when I realised the ground reality, I turned to learn tailoring and have been using the money from those orders to buy raw materials to make the pots. Otherwise, even procuring the mud and transporting it is an expensive affair. It costs anything between Rs 1,200-Rs 1,500.

This year, I have not really made many pots. Some regular customers have placed a few orders and I have completed them. Otherwise, with incessant rains and the uncertainty of sales, I have not gotten my hands on the clay and wheel. It’s very hard to bake them in such times,” shares the 33-yearold, who has earned only Rs 3,000 in the past month selling pots. In the place of 500 pots, S Rani and her team in Thiruvaiyaru have made only 200-250 this year — during their biggest season that too. The monsoon playing spoilsport over the past few months has only added to their misery. “People drop by at our house to pick up their pots starting from a week before Pongal.

With two days left, I’ve hardly had customers. Even the regulars have chosen to stay back in their cities because of the virus scare. Unlike other potter communities, we don’t put up stalls in cities. So there’s not been much business this year,” rues the third generation potter. Earlier, when joint families assembled in their ancestral house for Pongal, they would come and shop in bulk, tells Rani. “The members would pick seven to nine pots with lids for different rituals spread across four days.

They prepare four different types of pongal — one to offer the god, one for the family, one for the cows and one for friends and relatives. All the meals were prepared in pots. Now, even if one or two gets picked up, it’s a huge number,” says Rani. The pots are priced anywhere between Rs 40 and Rs 50. The price increases for pots painted using oil paints and watercolours.

Changing times
A few kilometres away, in Thanjavur, Annaimuthu and his team of seven potters are disheartened. “What’s the point in crafting some of the best pots using soil taken from the river beds of Kaveri when there’s no one to buy it? It’s heartbreaking to see how one pandemic has changed the whole scenario for us. Last year, we sold 350 pots for a good price. This time, it’s come down to 100. We usually sell a pot for Rs 50 or Rs 60 but that too has come down to Rs 35-Rs 45.

There’s no profit either. Although we depend on other festivals, Pongal is the peak season for us,” explains Annaimuthu, a fourthgeneration potter. Annai and team have also been shipping pots to Chennai through WhatsApp orders. “It’s risky because of the fragility of pots. Yet, we are left with no option but to adapt to the changing times. The pots are packed meticulously in cardboard containers and sent on mini trucks. There’s no assurance for its safety. I wish we could go back in time where people made it a point to buy the pots themselves.

Lesser the risk and better the business for us. Only time will tell if we will continue this profession next year,” he says. That things have been bleak all through the festival season has artisans looking for other avenues of income generation. “The sales have been damp since the Karthigai month. We hardly made any earthen lamps last year due to the pandemic.

We hoped it would get better by Thai but it hasn’t,” rues Inbarasu, a Chengalpattu-based potter, who along with his wife Revathi, has been planning to set up a small pottery school in the suburbs. “There might not be many takers for the pots but we were told by a customer that many are now keen on learning the art form! If we can pass on our knowledge while earning, then why not? But that’s an idea for the future,” he concludes. Perhaps there’s some hope in there.

Reduced income
Until 2020, around the Pongal season, potters in places including Thiruverkaadu, Mambakkam and Thiruvallur, used to earn Rs 8,000- Rs 10,000 a month (selling each pot for Rs 80 to Rs 90). Now, it has plummeted to just a few hundreds.