Holding on to humour

Even if the time now is too fragile to merit jokes, don’t give up on laughter, say members of the 38-year-old Humour Club International Triplicane

CHENNAI:  There is nothing in the world so irresistibly contagious as laughter and good humour,’ said Charles Dickens. While the current COVID-19 pandemic makes me want to sorely disagree with the English writer, a few comforting words from members of the city’s oldest comedy club Humour Club International Triplicane Chapter seem to calm my nerves and change my stance. “Vaai vittu sirithal noi vittu pogum (hearty laughter is the best medicine). Reading or telling a joke gives a sense of relief in such dark times so there’s no need to feel guilty; provided your jokes are appropriate and not hurtful. It helps you offer support to the sick ones,” suggests R Sekharan, secretary of the club.

Since its inception in 1983, not once have the activities of the club been suspended for this long. But their much-anticipated, four-hour Annual Day celebrations in July will be called off for a consecutive second year. “We’ve been jinxed, what else can I say... Humour Club is our second home and we all eagerly look forward to the second Sunday of every month for our two-hour weekly meeting. We’ve been missing the ‘ha ha’ and ‘ho ho’ since last April. Trust me, it’s so therapeutic to hear just that. Right now, the least we can do is regularly call and check on fellow members to ensure there’s some kind of moral support for them and nobody feels lonely. Most of our members are senior citizens so they need that pat on their shoulder to tide through,” he elaborates. 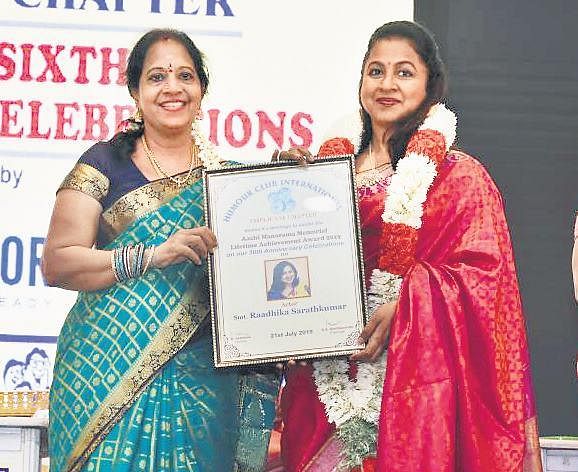 What started as a 15-member group with a monthly fee of Rs 12 at Hindu Senior School in Triplicane, now has over 2,000 members from all parts of the globe. The board members have been sharing videos and photos from their previous events every day on WhatsApp to keep the members engaged. “Our video archive is made available on YouTube for everyone to watch for free. People who want to join our club can visit our website, get in touch with us. We’re also encouraging members to pen jokes, cartoons and memes to stay spirited,” he notes.

The only respite for members until the club’s regular activities resume is to take a walk down the memory lane by revisiting their old programme videos. “Every video evokes nostalgia. I was new to Chennai and it was a friend who introduced me to a humour club 25 years back. With time, my husband and I started enjoying the activities so much that we planned our vacations in a way it did not disrupt our monthly meetings. How many monthly meetings at clubs would gather over 800 members? Affluent Tamil speakers from all fields were invited to give talks on various topics.

The standards of the club grew leaps and bounds and there was no compromising on quality,” recalls Vijayalakshmi Sankar, secretary of Humour Club International’s women’s wing, which is four years old. “While most of the activities are common, on International Women’s Day and International Mother’s Day, the women’s wing honours women who’ve made an impact. There’s also a line-up of healthy discussions and debates on topical issues,” she adds.

Not just for laughs
Regardless of the changing times, the club keeps up with its pure, unadulterated comedy that does not hurt sentiments. It has also been an encouraging platform for first-timers to express their talent. The members also ensure nobody walks out during a performance. Performing to a diverse audience has motivated them to be responsible with the content of their jokes.

Usha Ramakrishnan, a member, narrates how the club has set a benchmark with its meaningful and improvisational humour, and not resorted to slapstick comedy or self-deprecating jokes. “Sometimes, the jokes may not be funny but we clap to encourage the elderly members. It boosts their confidence and they feel accepted. Each of us has a style; my jokes are mostly political spoofs. Telling jokes is tougher than public speaking as it requires rigorous preparation and dedication. Jokes do get repetitive over time but you need to stay updated to not fall behind. Today’s generation of stand-up comedians have a different approach. They are more open, loud and bold with content.

Their jokes may be funny but we forget and move on. But laughter sessions in humour clubs stay in our memories forever because it’s a one-of-a-kind experience. Perhaps, this is why it may never be easy to bridge the generation gap.” Resonating with Usha’s beliefs, Swaminathan says, “A good humourist is someone who narrates well, is knowledgeable, has good body language and command over timing. When one of these goes wrong, a good joke can be messed up or an average one be spiced up. Sense of humour is a life-long skill. That’s something we’ve picked up from the club and our friends.” 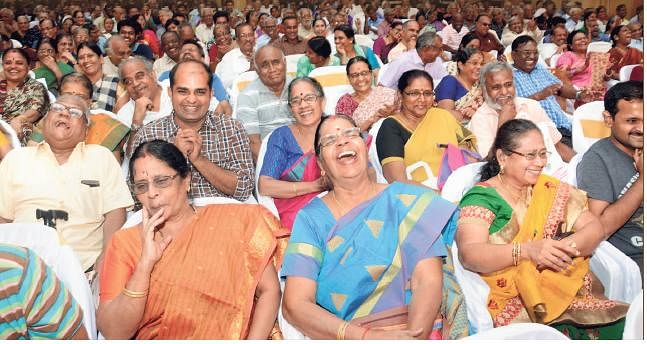 Beyond momentary pleasure, the club has transformed S Ramakrishnan’s perspective towards life. “I’m an auditor and I constantly travel for extensive lectures and conferences. I use humour to make dry subjects interesting. Perhaps, I’m also the only one who goes to the humour club meetings to note down all the jokes. I boast a collection of over 1,000 jokes. To date, I send one every day on social media. Humour has made me productive when I’m chasing deadlines. It has also helped me manage my team better. If I’m sailing through the pandemic, then it’s because of these jokes;a few minutes of laughter is all we need right now,” he shares.

Jokes apart
While smaller humour clubs in the city have come and gone owing to dwindling takers; this one is only growing stronger with a hardworking and transparent team, it seems. “Every meeting and event starts on time. Once we’d invited late film director K Balachander as the chief guest. The event began without him as he was late. Likewise, even for our biggest Annual Day event, we allow only members with an invitation. Members from different states and regions come to attend this. It’s as big as the Margazhi Music Festival for us. Even Kamarajar Arangam is houseful,” he boasts.

Besides being a source of entertainment, the club also contributes to social causes. Members pool in funds to support underprivileged students for their higher education and families of martyred heroes. They performed Sathabishegam for 60 couples in 2013 and Shasti Poorthy for 140 couples in 2015. Deserving candidates and speakers are awarded their three in-house awards annually Aachi Manorama’s LifeTime Achievement Award, director K.Balachander’s Lifetime Achievement Award and Thenkatchi Go. Swaminathan’s (Ex- All India Radio, Chennai) LifeTime Achievement Award.

Despite the enterprising work, not many are aware of its presence. What’s worse is the little to no participation from youngsters. “I’d written to colleges in the city asking for students to come and take part in humour club programmes but there’s been no positive response. I’m optimistic that we wouldn’t have any challenges in the near future. But it would be nice for the youngsters to carry forward the legacy for more generations. Our request for you is to just come once and then you wouldn’t have the heart to leave,” says Sekharan. More power to him and the team to keep us tickling through every crisis.
The annual membership fee is Rs 500 and the lifetime fee is Rs 5,000. For details, visit: humourclub.org/ Facebook: Humour Club International; YouTube: Humour Club International Triplicane Chapter

Now we are on Telegram too. Follow us for updates
TAGS
coronavirus Chennai Humour Club