The teenage girl had reportedly failed in her Class 9 examinations, and according to her father, she had also accused her teachers of sexually harassing her a while ago.

The teenage girl had reportedly failed in her Class 9 examinations, and according to her father, she had also accused her teachers of sexually harassing her a while ago.

The student of Ahlcon Public School in Mayur Vihar Phase-I reportedly hanged herself on Tuesday evening when she was alone at her home.

The father of the victim has blamed school for her daughter's suicide. 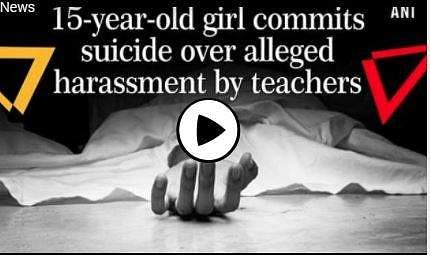 "She told me her SST teachers touched her inappropriately. I said since I am also a teacher I can say they cannot do it, might be a mistake but she said, 'I am scared of them, no matter how well I write they will fail me. Ultimately they failed her in SST. School killed her," he said.

The father of the victim also alleged that earlier one of the teachers of Alchon school fractured his son's hand after which he had put the child in another school.

Noida Superintendent of Police (SP) Arun K Singh said a case has been registered under Sections 306 (Abetment of suicide) and 506 (criminal intimidation) of Indian Penal Code (IPC) and Protection of Children from Sexual Offences Act (POCSO Act) and an investigation has been launched into the incident.

According to IANS, A constable was suspended on Wednesday for registering a case under wrong sections of the Indian Penal Code (IPC) in a case pertaining to the suicide of a 15-year-old school student in Noida, an official said.

The girl committed suicide on Tuesday after alleged harassment by teachers at her Delhi school, the family alleged.

She also reportedly told her parents that she was unable to focus on studies as she knew that she would be ultimately failed however hard she tried to pass the exam.

The girl was found hanging at their flat in Noida, which borders Delhi, and was rushed to the Kailash Hospital where she was pronounced dead.

The police have since registered a case under Sections 306 and 506 of the IPC and the POCSO (Protection of Children from Sexual Offences) Act, an official told IANS.

The Uttar Pradesh Police constable was suspended because he did not include POCSO in the First Information Report, police sources said.

The Principal of Ahlcon School reportedly told the police that the deceased had not failed but had to appear for a re-test, which was scheduled for later this week.