For years, residents of Giri Nagar’s labour colony are awaiting ownership rights to their flats

NEW DELHI:  At a time when inhabitants of the city’s 1,731 unauthorised colonies are to be given ownership to their properties, scores of residents living in the labour colony in Giri Nagar near Okhla Industrial Area feel that their property rights are being neglected by the authorities.

According to the residents, under the Subsidised Industrial Housing Scheme (SIHS), they were given the flats as per hire and purchase in 1994. Under the scheme, after a period of 15 years, the properties were supposed to be handed over to the industrial workers on a lease of 99 years.

“Due to the very nature of our homes we cannot sell and purchase the houses legally, as the properties are not in our name. The property value is also very poor despite being located in one of prime areas in South Delhi” said Anita Mewati, a resident of Balmukund Khand in Giri Nagar. Various governments have changed since, but the residents’ woes remain. 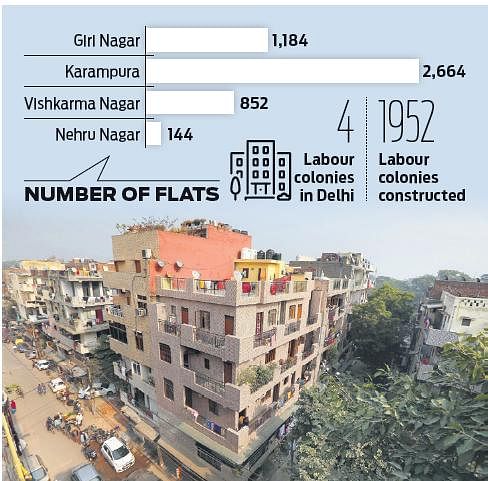 “The colony is so old that it was constructed before the existence of the DDA. We have held several meetings with the housing development ministry, state labour department, land-owning agency officials several times but nothing has changed. There is a lack of will from bureaucracy to register our homes in our name. Another problem is that the South Delhi municipal body claims property tax over this area which many of us do not pay,” said K Z Khan, general secretary of Balmukund Khand Resident Welfare Association in Giri Nagar.

An attempt was made by former chief minister Sheila Dikshit to provide relief to residents of Giri Nagar and three other such labour colonies in the national capital in 2008 but nothing materialised on paper.

Originally constructed in 1952 to provide roofs to workers on subsidised rates, the size of the flats in the colonies was 28 sq m in floor area.

The authorities have asked the residents to provide the status quo of their houses, but due to the lack of relevant papers, unauthorised construction has taken place in the colony. Most of the houses have built two to three extra rooms without approval from land-owning agency.

Local councillor Manpreet Kaur Kalra stated that as the issue is now about the illegal construction, the ownership process is now stuck. “The land belongs to the central government which demands status quo of the original 28 sq m but residents have expanded. The land and development office demands that these expansions be removed which is not possible. I believe that the people should get ownership after paying charges for the construction,” said Kalra.

“It would be a great help for us if the government allows us to register these properties in our name. Without the properties, which we have invested in expanding over the years, our kids will be out on streets. This is the only home we have,” said Nafisa Ali, a resident.

The land belongs to the Centre which demands status quo of 28 sq m but residents have expanded. The Land and Development Office demands these expansions to be removed which is not possible.
Manpreet Kaur Kalra, local councillor

Due to the very nature of our homes we cannot sell and purchase the houses legally, as the properties are not in our name. The property value is also very poor despite being located in one of prime areas in South DelhiAnita Mewati, a resident

More from Delhi.
Now we are on Telegram too. Follow us for updates
TAGS
Delhi Delhi unauthorised colonies Giri Nagar Okhla Industrial Area