Doctors confirmed that two youth were brought to the hospital with bullet injuries on Sunday evening.

NEW DELHI: Did the Delhi Police open fire on people protesting against the Citizenship (Amendment) Bill near the Jamia Millia Islamia on Sunday evening? While the police flatly denied it, two protesters, including a student from Jamia, were admitted to Safdarjung Hospital with bullet injuries.

Doctors confirmed that two youths were brought to the hospital with bullet injuries on Sunday evening. “One of them received a bullet on the chest and the other on the leg. They are still in the emergency ward,” said a doctor who refused to divulge further details and their medical condition.

According to a news agency, both were students. One of them is Sohaib Khan (23), a fourth-year student of B Tech at Jamia Hamdard. The other is Ajaz, 22.

Speaking at a press conference on Monday, Delhi Police public relations officer M S Randhawa denied firing by the policemen, claiming they were not carrying arms.

When contacted, DCP South East Chinmay Biswal said reports of the firing of rubber bullets were being investigated.

“We are yet to identify the protesters who have been admitted to Safdarjung hospital. We did not fire at the students. Therefore the matter needs to be verified before making anything official. If the protesters were hit by bullets, why were they not taken to the Holy Family Hospital, which is comparatively near? Instead, they were taken to Safdarjung, which is far away from Jamia,” he countered.

On Monday, peace returned to the site of Sunday’s protests. The situation was under control but the tension around and inside the Jamia was palpable. University Vice-Chancellor Najma Akhtar demanded a high-level inquiry into the matter. 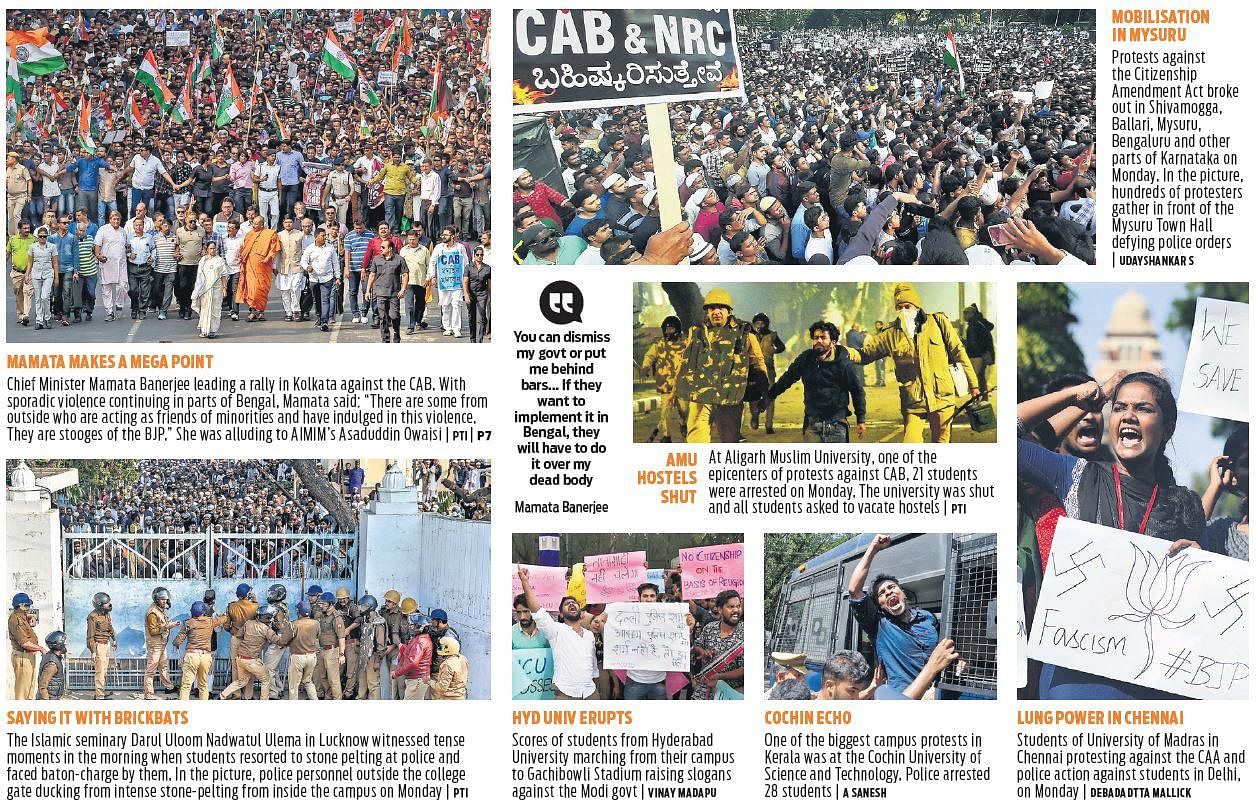 Voicing her concern over police action against the students, the V-C said police charged students who were studying in the library leaving a deep impact on them.200 students were detained by the police, who were later released, the vice-chancellor added.

The university administration has resolved to register an FIR against unidentified police personnel who indulged in violence and vandalism on the campus, a statement by the Executive Council of the university said.

However, the police said whether students of Jamia were involved in Sunday’s violence is a matter of investigation.

“We are identifying the protesters involved in the violent protest. Whether they were students or locals is a matter of investigation,” said a senior police official.

Meanwhile, students took off their shirts in bare cold to protest while others camped on the street outside the campus through the day on Monday, demonstrating against the police and the Centre. They shouted anti-government and anti-police slogans.

“Many of my friends are injured.  Several students continue lying unconscious inside the hostel. They are in trauma as police beat them up mercilessly last night. They called them terrorists. We are trying to take care of them but the situation is grim,” said Ikrama Hasan, a student of Geography honours of the university.

The students who witnessed the incident on campus claimed that police barged inside the campus from the main gates around 6 pm and continued to be on campus till 1 pm at night.

Some of them also alleged that the police made “Kashmir-style human chain” of some female students and used them as a human shield in the next door locality of Gafoor Nagar.