Dwarka to be metro interchange station offering connection to Najafgarh

Line to Najafgarh planned to be operational by year-end; new station at Dwarka linked to existing station by 80-metre passage.

NEW DELHI: Dwarka metro station on the Blue Line is all set to become an interchange facility offering a connection to Najafgarh in south-west Delhi. The civil engineering work has been completed and the Delhi Metro Rail Corporation (DMRC) is planning to open the new station by the year-end.

The name of the new metro line is yet to be decided.

“The station will have an 80-metre passage that will connect the old station with the new one. There will be concourse- to-concourse connectivity through the paid area,” said DMRC spokesperson Anuj Dayal. After Dwarka Sector 21, which offers connections to destinations on the Blue Line and the Airport Express Line, Dwarka will be the second interchange station in Dwarka sub-city. For instance, a passenger commuting from Najafgarh will have to change trains just once, at Dwarka metro station, to get on the Blue Line and reach Vaishali in Ghaziabad. 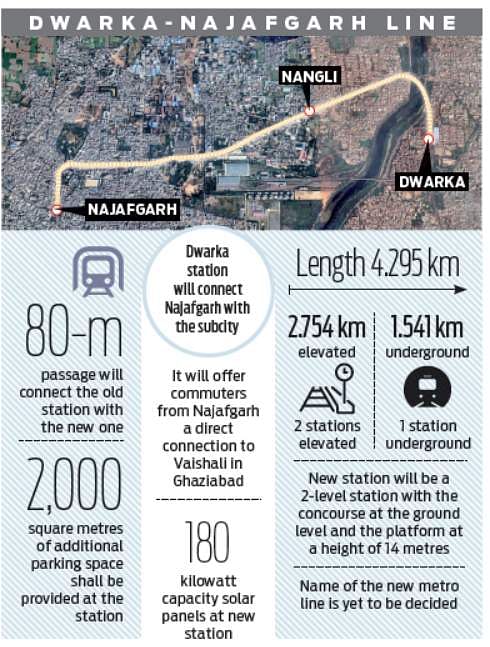 “About 2,000 square metres of additional parking space will be provided at the station. Elaborate multi-modal integration, with provisions for e-rickshaws, autorickshaws and feeder buses, has been provided at the station,” Dayal added. The Dwarka interchange station will also have solar power panels with a production capacity of 180 kilowatts. DMRC generates about 28 MW of solar power through rooftop solar power projects at its stations. The new station will be a two-level station with the concourse at the ground level and the platform at a height of 14 metres. The station will also have artwork installed at multiple locations for beautification. The date of inauguration has not been decided yet. However, the DMRC plans to open it by the end of this year. Work on the station started in 2015. The DMRC is also starting renovation work on the Red Line, Delhi Metro’s first line.

Now we are on Telegram too. Follow us for updates
TAGS
Najafgarh Dwarka metro station Delhi Metro Rail Corporation DMRC