Work on Phase 4 was delayed due to issues between the Centre and the Delhi government over the cost of land and taxes.

NEW DELHI: Amid a tussle between the Centre and the Delhi government, the Delhi Metro Rail Corporation (DMRC) is all set to commence work on three approved corridors under Phase 4 of the metro, after the Supreme Court on Friday directed the authorities to start work on it.

Under Phase 4 of Delhi Metro, 103.94 kilometres of new lines have been proposed.

“Out of these, three priority corridors comprising 61.679 km have been approved by both, the Delhi government and the Centre. These sections are Aerocity-Tughlakabad (20.20 km), Janakpuri West-RK Ashram (28.92 km) and Majlis Park-Maujpur (12.55 km),” a DMRC source told The Morning Standard.

The Centre has not approved the three other proposed corridors: Rithala-Bawana-Narela, Inderlok-Indraprastha and Lajpat Nagar-Saket G Block, which have been given the nod by the Delhi government.

“The DMRC is engaged in initial preparations for commencing work on the three approved corridors under Phase 4.  The tenders for the entire elevated corridor from Maujpur to Majlis Park comprising eight stations will be floated next week. In addition, the tender for the Krishna Park metro station and its accompanying TBM work will also be floated shortly,” the source said. 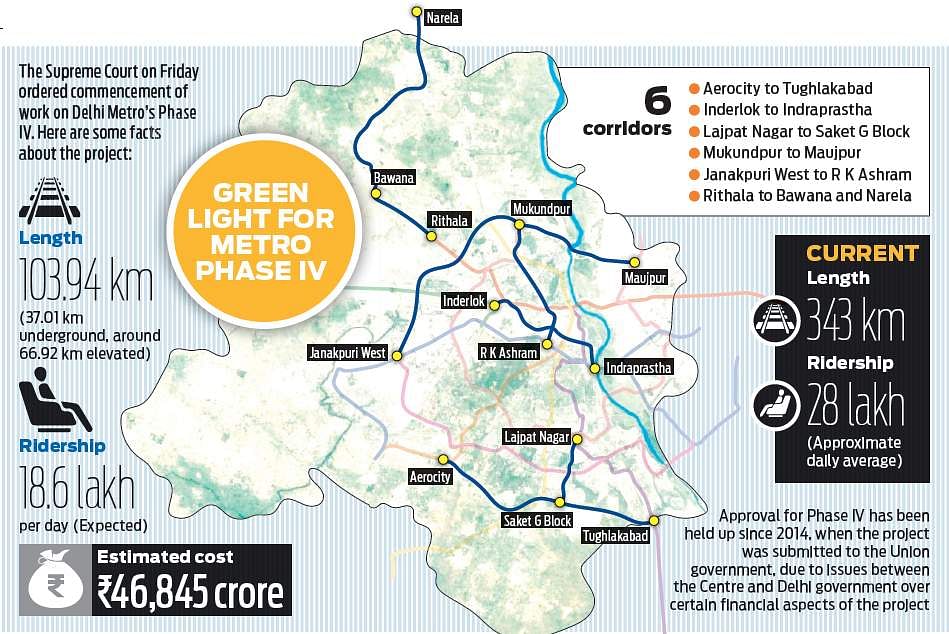 Work on Phase 4 was delayed due to issues between the Centre and the Delhi government over the cost of land and taxes.

The Environment Pollution (Prevention and Control) Authority had requested the apex court’s intervention in breaking the deadlock between the two governments.

A bench of Justices Arun Mishra and Deepak Gupta said that issues concerning sharing of land cost and taxes between the Centre and Delhi government would be heard by it on July 19.

The Delhi government had asked the DMRC not to commence work on Phase 4 as it wanted the Centre to share the operational losses and said the state government would not bear any liability for repayment of a loan from the Japan International Cooperation Agency.

The first civil tender for Phase 4, for 10 elevated stations as well as a viaduct on the Janakpuri West-RK Asharm corridor, was floated on July 2.

The section for which the tender has been floated will be an extension of the Magenta Line. ​

The RK Ashram-Janakpuri West corridor is a 28.92-km section comprising 25 stations. While 7.74 km of it will be underground, 21.18 km will be elevated.

Delhi government wants work to begin on all corridors

The Aam Aadmi Party government in Delhi has asked for start of work simultaneously on all six corridors of Delhi Metro’s Phase 4, Transport Minister Kailash Gahlot said on Friday.

The six corridors were approved by the Delhi government in December 2018.

The Centre in March 2019 dropped three while approving the rest. “It was said by us in the court that we have no objection to starting work on the project but work should also start simultaneously on remaining three corridors which have been left by the Centre in its approval to the project,” the minister said during a press conference.