NEW DELHI: While the rest of India had an above-normal monsoon this year, the national capital recorded a 38 per cent deficiency in rains, receiving the lowest rainfall since 2014, according to the India Meteorological Department. 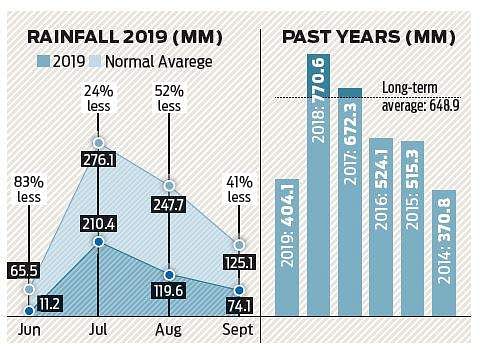 The country overall had an “above-normal” monsoon, receiving 10 per cent more rainfall than usual. The monsoon season officially begins on June 1 and ends on September 30.

August was also relatively dry, with only 119.6 mm precipitation occurring against the average of 247.7 mm. The city recorded 74.1 mm rainfall against the normal of 125.1 mm in September.

That’s why central India saw an increase in rainfall and Indo-Gangetic plains recorded a decline, he said.

“No significant weather system developed in the Arabian Sea this year. The two cyclones that formed in its northern part, ‘Hikka’ and ‘Vayu’, moved towards Oman,” he said.

Stay up to date on all the latest Delhi news with The New Indian Express App. Download now
TAGS
Delhi Rains IMD