NEW DELHI: Since the implementation of the Motor Vehicle (Amendment) Act 2019 on the September 1, the total number of applications for driving licences have gone up by 56.83 per cent in contrast to the last month when it went up just by 4 per cent between July and August.

According to the data by Ministry of Road, Transport and Highways, the total number of applications received in Delhi in the month of September was 1,75,576 including learning licence, driving licence and conductor licence. 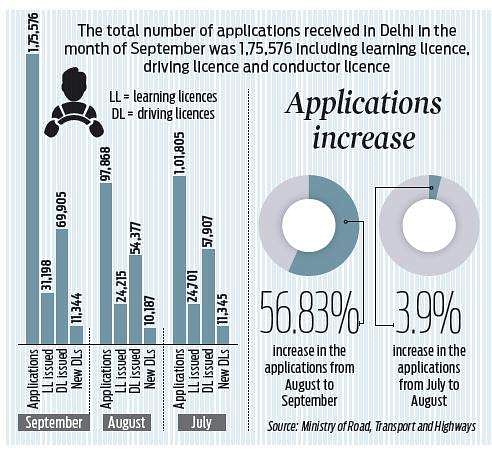 “The rise in number of applications for licences shows that the people have taken the new law seriously.  This was the primary reason for bringing a serious law on the roads so disciplined traffic movement can be witnessed along with prioritising the safety of the driver, passenger as well as the commuters on the roads,” a state transport department official said.

Professor PK Sarkar, director of transport at the Asian Institute of Transport Development,  said that the MV Act has significantly affected driver behaviour on roads.

“The severe penalty is the reason for rise in the applications. A large number of drivers, including commercial drivers, did not have a licence and there was no proper vigilance. Now if caught, you will end up paying hefty fine which everyone is trying to avoid,” he said