Delhi government moving ahead on plan for staggered work hours

The chief minister had invited Aggarwal to discuss the means of implementing staggered office hours in Delhi. 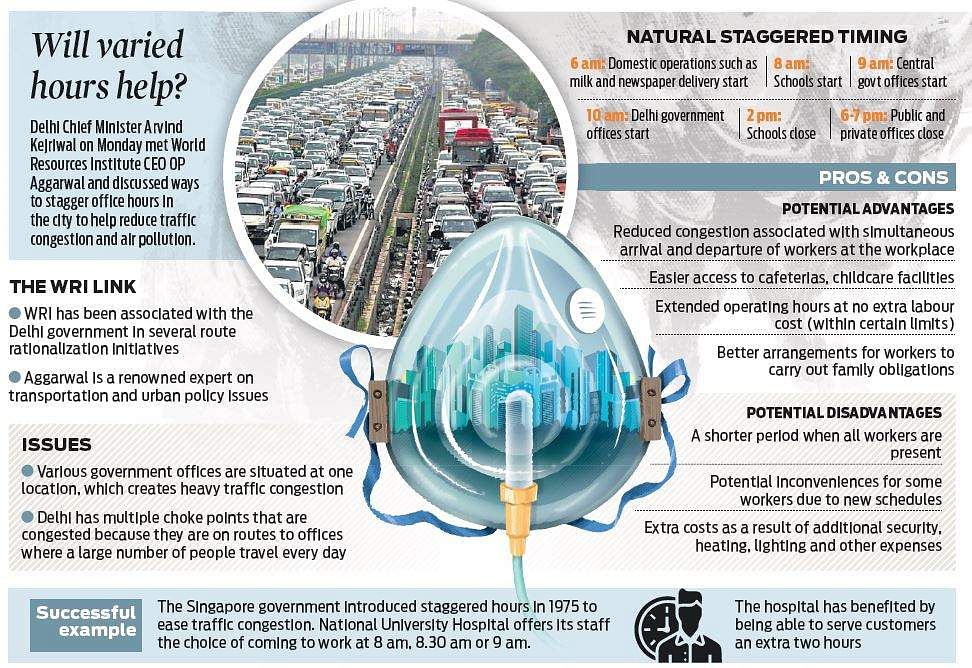 “The Delhi government is taking all possible steps to prepare for the onset of the parali (burning of crop residue) and winter season. We have already announced an action plan for tackling the situation. In addition, we are pursuing the idea of staggering office hours to cut down on vehicular emissions due to congestion. This is a tried and tested method used around the world,” Kejriwal said.

The chief minister had invited Aggarwal to discuss the means of implementing staggered office hours in Delhi.

“Delhi has multiple choke points that are congested because they are on routes to offices where a large number of people travel every day. We will identify such points and routes and explore possibilities of staggering hours for those who use such arterial routes,” the chief minister said.

Meanwhile, Transport Minister Kailash Gahlot, who has returned from a trip to Brussels, Paris and Geneva, said: “All these cities are in the process of changing over to e-buses and are grappling with the challenges of cost and charging infrastructure. We will also plan to replace our entire fleet with electric in the long run. Operation of e-scooters on sharing basis in Brussels can also be considered as an option for last-mile connectivity in Delhi.”.

Kejriwal said: “Although Delhi is already doing a lot to improve public transport, the world is moving at a faster speed in terms of electric transport. We will make Delhi the EV capital of the country, and we have already placed an order for 1,000 electric buses. Delhi needs to plan to convert the entire fleet of transport vehicles into e-transport in a fixed time frame.”

Stay up to date on all the latest Delhi news with The New Indian Express App. Download now
TAGS
Arvind Kejriwal AAP