Women power to the fore in Haryana and Maharashtra elections

We share the stories of some unique women of substance contesting in the Assembly poll fray in Haryana and Maharashtra.

They are women with a difference. Cool, collected, resourceful, determined and focused-they, despite their different political leanings and commitments, want to do something to bring about change in their immediate societies. Some are homemakers who ‘felt the urge’ to help others. Another gave up a cosy job abroad to join the fray. Some others are entrepreneurs, social activists, fighters for prohibition and against the builders’ lobby. A few are in the ring to preserve the political legacies of their families, while all share one thing-conviction, irrespective of the ideology they stick to. We share the stories of some such unique women of substance in the Assembly poll fray with Abhijit Mulye reporting from Maharashtra and Harpreet Bajwa in Haryana.

Depending on ‘people power’ 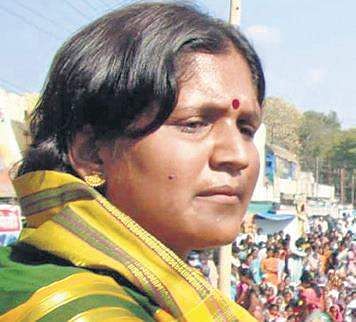 Advocate Paromita Goswami has been working for the unorganized sector workers in Vidarbha for over 20 years now through ‘Shramik Elgar’, a people’s movement. She also played a major role in liquor-free Chandrapur movement through her vast network among the tribal and rural women. Apart from her core work among unorganized workers, she has been credited with raising issues of tribal rights and issues of women and children from time to time. Daughter of an army officer, Paromita came to Tata Institute of Social Sciences, Mumbai after completing her graduation in literature from St Xaviers’ Kolkata.

She later became a Yale fellow and also went to JNU, Delhi for PhD in law and governance where she met her husband Kalyan. He studied history and trade unionism at JNU and now runs a practice as a lawyer at Chandrapur and also helps her with cases of Elgar. Paromita was awarded with the title of the “Maharashtrian of the Year” by a Marathi news channel. Earlier, she also won the “Mahatma Gandhi Award” for her work in the field of prohibition. As an AAP candidate, Paromita will now be taking on the current leader of the opposition and four times legislator Vijay Wadettiwar in a quadrangular fight.

Armed with an MA in Psychology, MBA in marketing and well versed in German and journalism, Mukta Tilak represents the true ‘elite’s of the ‘knowledge capital’ Pune. Born in the Narayan Peth area, Mukta married Shailesh, the great-great-grandson of ‘Lokamanya’ Bal Gangadhar Tilak. She contested her first election as BJP candidate for Pune Corporation in 2002, a year after the death of her father-in-law Jayant Tilak, who was a Congress leader. She has represented the party in the Corporation for three consecutive terms since then.

She is active through her own group in gathering information on families of freedom fighters and regularly conducts programs for them. Elected as mayor in 2017 she soon won the hearts of the people. She was in headlines last month when, after welcoming the immersion procession of lord Ganpati as the first citizen of the city and even danced to the tune of a popular Marathi song “Mala Aamdar Jhalyasarkha Vattay” (I feel like I’m an MLA), which went viral.“This constituency had been a BJP bastion for long. I’m happy that party has trusted me with this big responsibility. I shall certainly try my best to carry forward the legacy,” she said indicating that remains her appeal to her electorate too.

Varsha Gaikwad was born in the family of senior Congress leader Eknath Gaikwad, and picked up his social connect at a very young age and has excelled in it over past 15 years while representing the largest slum of Asia in the state assembly. Local workers proudly say that her efforts in knitting the party organization in the constituency was the reason that she sailed through in the Modi wave of 2014.

As a young graduate, she had also worked for NGOs like Pratham and Sneha that are known for their work in the field of child education, child labour and helping and rehabilitating destitute children.
Varsha entered the electoral arena in 2004, which was the golden period of the party. After winning the assembly election for the second consecutive term, she became the minister of state for higher and technical education and medical education and was consequently elevated as Minister for Women and Child Welfare in about a year’s time.

She served on the post for four years and was briefly a Senior Vice President of Mumbai Regional Congress Committee which gave her the necessary insight into the development of party apparatus. “I’m sure of victory. Dharavi is on the verge of change and I want to be a guardian of the interests of people here in that process. That is my added appeal and they trust me,” she said.

She is one of the youngest BJP woman candidate for Punhana assembly segment in Haryana. Nauksham Chaudhary, 27, who just quit a “high paid job” in London, admits to being a novice in politics, “but eager to improve the socio-economic condition of the people” of her area. Chaudhary, who did her post-graduation and graduation from Miranda House and Delhi University in history with a specialisation in modern India, later studied luxury brand management and fashion business at Milan, Italy.

“I joined politics to be a part of governance to do something for the backward area I belong to. Mewat has seen no development for decades. I am here to serve it selflessly,” she said.
Asked why she chose BJP Choudhary said, “BJP has a vision for young India and the future. Besides, it is a transparent party. Her focus areas are clear. She wants to improve education, infrastructure, water and sanitation “so that people of Mewat can have best of basic facilities.”

Her other priority will be women's education. And for that, she aims to establish a university in her constituency. Choudhary who hails from Paina Khera village in Punhana is the daughter of a former judge RS Chaudhary and her a Haryana Civil Services officer mother, Ranjit Kaur.

Voice of the downtrodden

Poonam Kohli, 30, is testing political waters for the first time from Rohtak seat for the Bahujan Samaj Party (BSP). Her aim: To uplift the depressed classes and other backward groups of society by fighting for their rights in the corridors of power. Kohli, who is an M. Com and B. Ed, joined the political mainstream inspired by her in-laws who are active members of the Mayawati led BSP.

My husband’s elder brother Satpal Kohli fought assembly elections in 2000 and 2004 on a BSP ticket from Kalanaur assembly segment but lost. My own uncle was associated with Kanshi Ram,’’ she says.
Poonam, a mother of two children and a homemaker, said that she has been active in the field for the past five years “as a problem solver” to her constituents.“My husband Mandeep Kohli is a state employee and we have a comfortable life, but I choose to come in politics as I think I can only uplift of the poor can help the society grow. Being part of governance will give help,” she adds.

Kohli is presently “campaigning from dawn to dusk” but says that catching up and spending quality time with her two sons remains a priority. I have the full support of my husband and family and they welcomed my decision to join political work actively,” she said.

A co-founder of a start-up,  Sheilza Bhatia, 45, is the Swaraj India candidate for Gurugram seat, promising ‘clean and honest politics.’ Bhatia, who has been working for women's empowerment and was associated with AAP since the Anna Hazare movement, says, “the issues in assembly elections are different from the Lok Sabha.” She wishes to focus on infrastructure, clean air and security for women.

Co-founder of Uniform Republique, which has been designing and manufacturing uniforms for corporate groups for the last five years, Bhatia says,  she was impressed by the Anna Hazare movement for transparency and has been in active politics over three elections.

Bhatia said, she had campaigned for the joint AAP-JJP candidate Mahmood Khan in the recent parliamentary elections. In May this year, she decided to quit AAP and take a break to help her Class XII son take his examinations. But as Yogendra Yadav, founder of Swaraj India, for whom she had campaigned for the party in Mewat in 2014 convinced her to fight the polls, she agreed.
“It was a sudden decision, though I had never been serious about it earlier,” she said. Bhatia also runs Janm Foundation, an NGO, which works in Mewat area of Haryana to create livelihoods for women.

An entrepreneur and activist, Renu Khattar, 42, is the Swaraj India candidate from Faridabad.
Khattar is tough and has fought the builder-politician lobby over four years and to stop illegal mining in Aravalli. She is in the ring to win and bring about change in Faridabad. A B.com and software graduate, Renu recalls the protest she organized last year in February. “More than 20,000 people who had booked flats in Sector 75 to 89 of Greater Faridabad since 2006 till 2009, have still not given the possession of their flats and they have been running from pillar to post for the last 10 to 14 years while living on rent and also paying EMI of bank loans.’’

“There have been 9 protests, memorandums to local MLA and cabinet minister Vipul Goel, CM Khattar, but nothing happened. Also Illegal mining is opening going in Aravali belt. We need to stop this exploitation,’’ she says. A single, Renu says, I realized that politicians are thick-skinned and they hardly work for change. “If I win, I’ll be able to challenge the situation better,” she says. Renu also runs ‘Jagu -Joint Action Group of Faridabad- to fight the high crime rate and an activist of Builder-Administration and Politicians to fight for city infrastructures like roads, street lights and proper sewerage lines.