Rehan Khan, a native of Bihar's Champaran district, was in an inebriated state, according to Delhi Zoo sources.

NEW DELHI: A man jumped inside the enclosure of a lion in the Delhi's National Zoological Park on Thursday, but escaped unhurt as the alert zoo staff acted quickly and tranquillised the animal.

The man, identified as Reham Khan, a resident of Bihar has been taken in police custody for further interrogation. 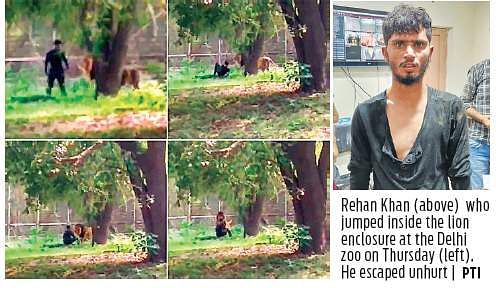 The incident took place around 12.30 pm. The situation is under control now, Zoo sources said.

The other visitors, who were witnessing the scene tried to distract the lion away from the man and some were seen shouting for help.

"The man entered into an enclosure of a lion after climbing its metal grille.  He seems to be mentally unstable. He was immediately brought out without any injury," said DCP Southeast. Rehan Khan, a native of Bihar's Champaran district, was in an inebriated state, they said.

Earlier in 2014, a similar incident had happened where a 22-year-old fell inside the pit of a white tiger and was killed by it.

Stay up to date on all the latest Delhi news with The New Indian Express App. Download now
TAGS
Delhi Zoo