500 families of the unauthorised colony situated in Janakpuri face a host of problems, starting from cramped roads and lack of street lights to name a few.

NEW DELHI:  Residents of ‘40 Feet Road Colony and Market’ in Janakpuri over the past several years have seen the area they live in, shrink in size. This shrink has ushered in a whole host of problems for the residents of the area in this unauthorised colony.

Interestingly, the road which is named ‘40 Feet Road’ now in terms of width, only spans a meagre 20 feet. According to Shamsher Chahar, head of the Resident Welfare Association (RWA), parking, sanitation, and public toilets are the biggest problems which plague the community.

“We have a big market at Chanakya Place but due to lack of any proper parking space, it is almost impossible to cross this stretch without spending 20 minutes during rush hour. Municipal Corporation of Delhi which is responsible for sanitation is also not clearing the garbage due to area jurisdiction issue,” said Chahar, who is also the president of Chanakya Place market association. 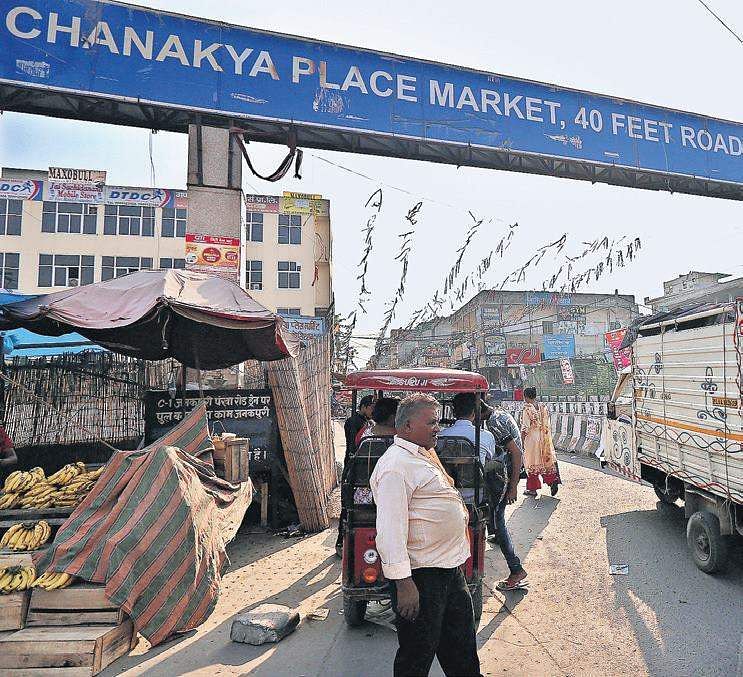 Situated over an MCD drain, one is welcomed by a foul stench upon entering the market. Most of the building structures lined on both sides of the uneven and narrow road are under mixed-land use, with shops on the ground floor and residences on the floors above.

“The market road is reducing in size day by day. We have a DJB pumping station at the end of the road. Many trucks pass through this road and the drivers are very rash. There is also no public toilet in the market area, so if a customer comes and needs to use a toilet, they’ll have to travel almost 500m to reach one. All this makes it very inconvenient for the people,” said Yashwant Gupta shop owner of Rajasthan Trunk House.

The congested lanes of 40 Feet Road colony houses around 500 families yet still the issue of inadequate street lights persists. The lack of a proper community hall also echoed among the residents, as no community functions could be held in its absence.

“More street lights need to be installed, as after the market is closed at night, the place gets completely swept under darkness. We recently heard about the New Delhi government’s scheme under which you can install your own street light. While it sounds promising, we have no idea about whom to contact in this regard,” said Dwarka Prasad, a resident of the area. “There is also no community hall in our area. It would be great if the authorities built one for us,” he added.

The municipal councillor from the area Veena Sabarwal stated that residents have raised demands about a parking lot in the area in the past but the problem of finding a vacant plot for its construction persists.
“Public should not be in pain. We as representatives should find solutions to the problems of the people. Parking issues will be raised in the next working committee. The sanitation and picking up garbage is being taken care of. Recently the RWA and other residents brought it to my notice, so I pushed my staff on the ground and deployed loaders to pick up the garbage accumulated twice a day. If the residents have any more issues, I am ready to help wholeheartedly,” said South MCD, Milap Nagar councillor Veena Sabarwal.

Issues that plague the streets

The road along the colony named 40 Feet Road, only has a width of 20 feet, which makes it difficult for commuters  There is no dedicated parking space for vehicles  Lack of public toilets for residents and shoppers  Inadequate number of street lights, which makes neighbourhood unsafe at night  Garbage not picked up on time