As Delhi’s overall air quality index fluctuated between 315 and 284 on Friday, SAFAR has predicted highest impact of firecracker emissions between 1-6 am on Monday

NEW DELHI: The national capital’s air quality declined drastically on Friday, with the decreased wind speed leading to accumulation of pollutants and affecting dispersion. Five areas across the city were in the “very poor” category of the Air Quality Index (AQI) while most of the areas were under “poor” with AQI ranging from 260 to 300. 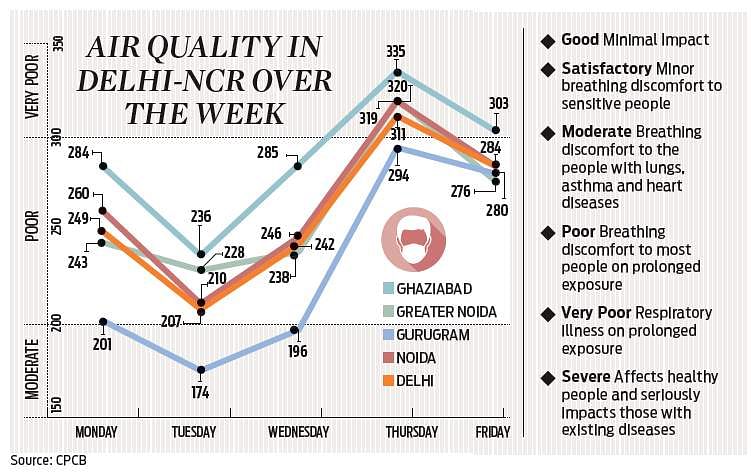 An AQI between 0 and 50 is considered ‘good’, 51 and 100 ‘satisfactory’, 101 and 200 ‘moderate’, 201 and 300 ‘poor’, 301 and 400 ‘very poor’, and 401 and 500 ‘severe’.The Ministry of Earth Sciences System of Air Quality and Weather Forecasting And Research (SAFAR) said,” The highest impact of firecracker emission is expected in the early morning of October 28 (1 to 6 am). In a normal course, the stubble burning induced impact is expected to be moderate and if no additional emissions due to firecrackers are added then air quality will remain in middle range of very poor during Diwali period” The share of stubble burning in Delhi’s PM 2.5 concentration is predicted to be 18 per centon Saturday.

“However, if 50% of the total load of fire crackers (as compared to average of Diwali 2017 & 18) is added, the AQI may plunge into severe category for a short period but with relatively much less magnitude (half) than 2018 Diwali period. However, as winds are likely to flush out the expected high impact of firecracker emissions, AQI will be soon return back to very poor within a day and then descent to higher range of very poor by  October 29,” SAFAR added.

Stay up to date on all the latest Delhi news with The New Indian Express App. Download now
TAGS
Delhi air quality