Delhi's apprehensions came true despite the top court's order that only green firecrackers, which cause 30 per cent less pollution, can be manufactured and sold,

NEW DELHI: Two days since Diwali, the air quality in the national capital continues to worsen with some places hitting the “severe” 450-mark according to the Air Quality Index (AQI).

Places in central Delhi such as Jawaharlal Nehru Stadium, Mandir Marg and ITO hit AQI levels of 421,413 and 406 respectively, around 9 pm on Tuesday. 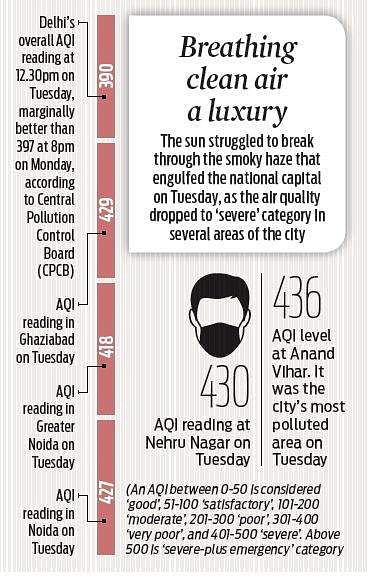 The areas of Anand Vihar and Ashok Vihar registered 452 and 430 respectively on the AQI, while peripheries including Wazirpur and Bawana were at 437 and 425.

As per data from the Ministry of Earth Sciences System of Air Quality and Weather Forecasting And Research (SAFAR), these AQI readings indicated the deteriorating air quality in the city.

The city has seen a spike in pollution despite the order of the Supreme Court, which had decided that only green firecrackers with 30 per cent lesser emissions would be allowed to be sold in the NCR region.

The Delhi Government had even organised a mega laser show to discourage people from burning firecrackers.

“I appeal to the Punjab and Haryana governments with folded hands on behalf of the residents of Delhi to take strong steps and prevent Delhi from becoming a gas chamber.

At our level, we are making all possible efforts and will continue to do so,” CM Kejriwal tweeted in Hindi.