The Manor Hotel rolls out in a whole new avatar on its 20th anniversary, thanks to Asaya House.

The quaint boutique property, The Manor Hotel in New Friends Colony, has now gained a swish makeover. When the team of Asaya House took it over again to reimagine in a new light (It had originally been designed in 1999 by the same team), the expectations and anticipation of patrons grew more resolute to witness the transformation of this charming property.

On the occasion of its 20th anniversary, it’s been rolled out in an all-new avatar. Set in a lush green avenue, The Manor Hotel is where a slice of quietude can be felt within city comforts. “This has been our strong selling point. It’s an oasis that pulls you through its structural conceptualisation away from distractions.

After having worked with several top hotel brands, I’ve come to realise that guests are now preferring smaller, properties that are comfortable yet indulgent rather than humongous business hotels,” says Akshay Chawla, General Manager (GM).

The Manor has only 12 rooms, a feature that makes staying there private. It’s complemented with new offerings such as a larger than before public space complete with amenities for a leisurely outdoor experience, one that will get enhanced with the onset of winters.

There are two culinary destinations called in-Q and Noci, in addition to an Ayurveda spa and health centre. “Chef Aditya Kumar Jha from in-Q has worked on giving a modern take to Indian cuisine, whereas Noci is an Italian cafe, best known for its wood-fired pizza and coffee,” says the GM. 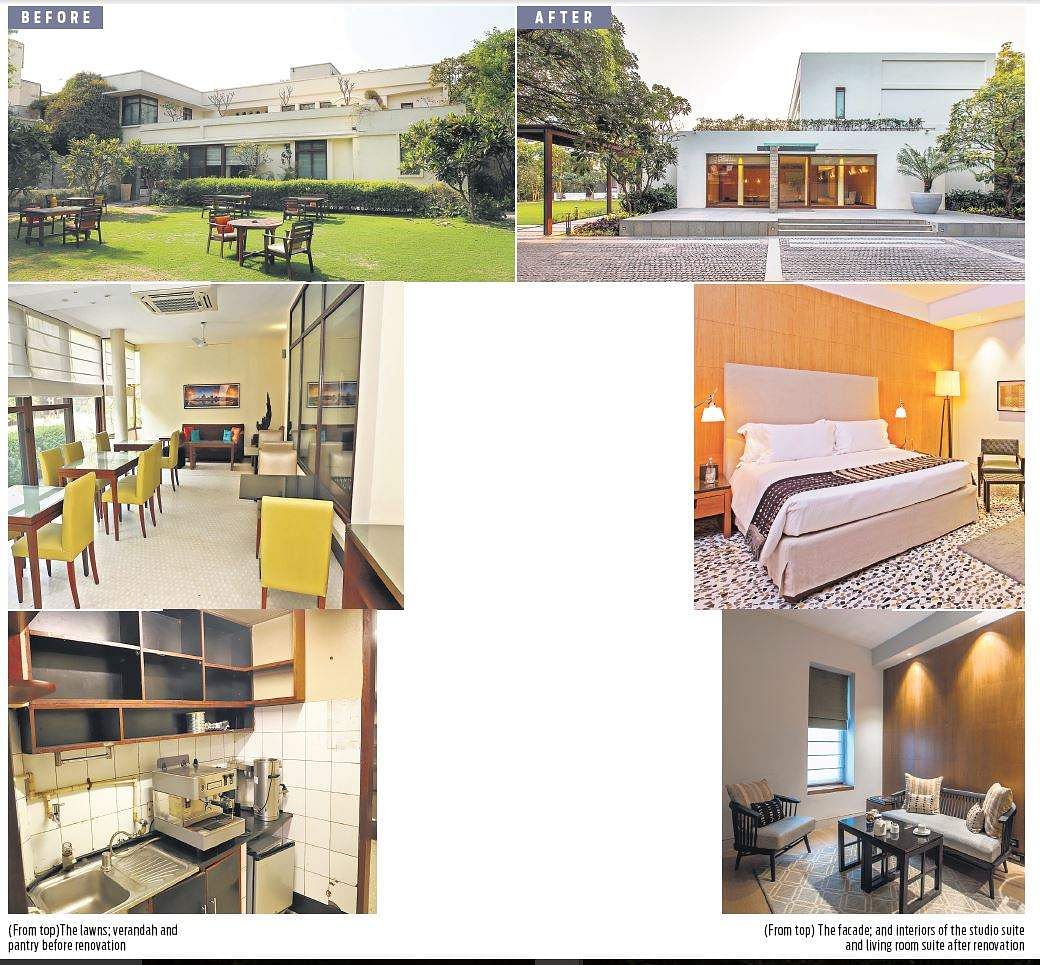 These additional services support the profitability of the hotel, says Chawla. The design incorporates handcrafted and in house concepts and fabrication rather than bringing in popular brands.

No structural changes have been made to the building, however, service has been upgraded. “Various patterns of mosaic and terrazzo have been used in a contemporary palate, combined with medium-toned wood, green granite and slate.

The fabrics are grey-green, and grey and matt black furniture offer an understated style. Custom oversized floor lamps complement the mood of the rooms,” says Chawla.

Twenty years later, the growth in connectivity and technology has enabled the traveller to stay connected worldwide. And in turn, the appreciation for unique experiences shares Chawla. “It’s become imperative to stand out as a unique product while being up to date if not ahead of time. Things that were a luxury 20 years back are now a necessity.

What travellers have grown very particular about is how you make them feel. Thus, it becomes critical to stick to your values including the most important one: guest-first.

With this, we forge towards the future for this old property with a new heart.