Kaninika Mishra’s The Indic Quotient (Bloomsbury India) celebrates the passionate endeavours of Indians on a quest to reclaim the country’s ancient knowledge systems and cultural heritage.

Kaninika Mishra’s The Indic Quotient (Bloomsbury India) celebrates the passionate endeavours of Indians on a quest to reclaim the country’s ancient knowledge systems and cultural heritage. It highlights stories of successful ventures and social initiatives centered on Indic ideas such as handloom and textiles, yoga, Ayurveda, art and literature, temple conservation and indigenous food. 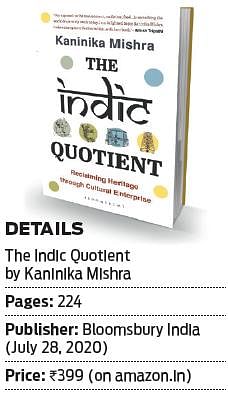 It took Mishra four years to write the book, for which she travelled along the length and breadth of India – interviewing weavers at government textile centres in remote Arunachal Pradesh, trekking to a mountain village in Uttarakhand to meet farmers, checking-in at an Ayurveda treatment centre in Kerala and visiting a gaushala in Gujarat. Mishra heads the learning and development department for a communications firm in Gurugram. Excerpts:

How did you hunt for the ‘real stories’ centred on Indic ideas?
The idea germinated when I began learning yoga. I saw a growing interest in yoga, Ayurveda-based beauty products, khadi, and a spurt in ventures on these ideas. I met several people, academicians, intellectuals, and entrepreneurs, who were devoted to preserving and promoting heritage. These conversations led me deeper and I began to research the larger dynamics of the sector, the history and background of the various knowledge systems related to the theme. I met over 70 people of which 56 are part of the book.

What is the state of India’s handloom sector?
India is home to over 700 weaving clusters, each having their own unique style. While some are self-sufficient and even entrepreneurial, others rely on government support. The interest in khadi, handloom textiles and indigenous art has grown significantly in the past five years. It is due to the government’s focus on promoting these crafts and an increased awareness of India’s rich textile traditions among designers and consumers. Social organisations, too, are playing a significant role in uplifting this sector.
I have covered five craft-based ventures in my book, including social enterprises focussed on artisan welfare and designers committed to preserving and promoting a particular handloom variety.

Which of these stories is the closest to your heart?
It is difficult to pick one. However, the story of the making of Punyakoti, the world’s first Sanskrit animation film and the journey of its director, Ravishankar Venkateshwara, is very inspiring. It took him six years to complete the project. He faced innumerable challenges along the way, but Ravishankar’s perseverance and commitment to his mission has been extraordinary.

What do you think are the reasons for the psyche of the urban Indian consumer going back to being loyal to traditional Indian products?
We never became unfamiliar to our heritage. Yoga and Ayurveda survived by becoming a part of our daily lives. The weaving tradition continued despite the imperialistic blow to the handloom industry. However, traditional knowledge systems were marginalised and existed in ‘pockets’. But, these could not be mainstreamed due to the push towards modern industry and Western science in the post-independence era and the influence of Western culture after India liberalised its economy in the 1990s.

Thirty years of economic growth after liberalisation has made us more self-assured about our identity. Several entrepreneurs I spoke to have been direct beneficiaries of the economic liberalisation. Many of them have worked in multinational companies and even lived abroad, but are not fascinated by the West like the generation before them. They are also more equipped to package our ancient ideas in suitably modern ways to preserve and promote them.  In the realm of beauty products, I would credit entrepreneurs who translated Indian beauty traditions into a modern idiom.

Now we are on Telegram too. Follow us for updates
TAGS
Kaninika Mishra