The road cave-in at Bhairon Marg and waterlogging forced the Delhi Traffic Police to close a couple of roads connecting east Delhi with north and central Delhi.

The road cave-in at Bhairon Marg and waterlogging forced the Delhi Traffic Police to close a couple of roads connecting east Delhi with north and central Delhi.

Residents shared on social media pictures and videos of rainwater gushing into their houses and vehicles navigating waterlogged roads. “I started around 4 pm from Gandhi Nagar for Dhaula Kuan.

As the Salimgarh Bypass road was closed, the traffic was diverted to the Geeta Colony flyover. I had to go all the way to Akshardham and then reached Mandi House.

"The traffic in central Delhi was smooth. However, it took more than an hour to cross the Sardar Patel Marg,” said Vikram Tripathi, a resident of east Delhi. 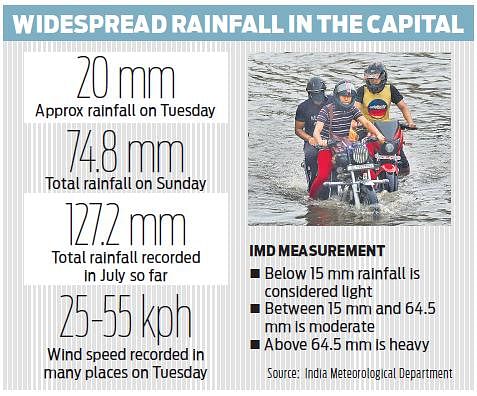 Another commuter Nekhita Talwar, a central government employee, who was travelling to Noida from the Central Secretariat said: “I usually take the ITO route, but the road was closed due to heavy waterlogging at the WHO Building construction. But today, I had to take the DND Flyway, that took me about two hours. The road was completely chocked.”

Heavy traffic was seen at the DND Flyway, Barapullah and Geeta Colony, as it was coming from the Ashram end.

No vehicle was allowed towards the ITO from Nizamuddin Khatta.

“It took me more than one hour to reach RK Puram from Moolchand. Every year, we face this. What is the civic authority doing? We need to have a permanent solution to the problem,” said Tanmay Sinha, a software engineer. On Sunday, the traffic was also disrupted due to heavy waterlogging after rains.

Now we are on Telegram too. Follow us for updates
TAGS
Delhi rains Delhi waterlogging