Gupta on Sunday had announced that South Delhi mayor Anamika Mithlesh had agreed to withdraw the proposal recommending hike in tax rates.

NEW DELHI:  In yet another snub to Delhi BJP chief Adesh Kumar Gupta, the South Delhi Municipal Corporation (SDMC) has given approval to increase taxes on rented commercial properties, transfer duty, and to levy a professional tax for the first time in the national capital.

Gupta on Sunday had announced that South Delhi mayor Anamika Mithlesh had agreed to withdraw the proposal recommending hike in tax rates. “I have spoken with the SDMC mayor and requested her to take back the proposal for increasing taxes as proposed by the municipal officials. 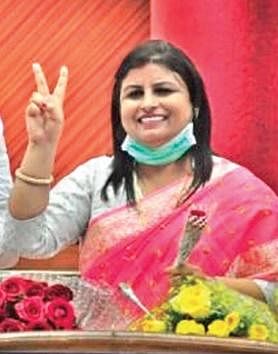 Mayor has agreed. I appeal to (chief minister) Arvind Kejriwal to give funds to the municipal corporations according to 4th Delhi Finance Commission (DFC) to end the financial crisis,” his tweet in Hindi said. However, in an apparent snub to the state leadership, the SDMC gave go-ahead to the proposals on Monday. Mithlesh said the decision was taken to improve the financial health of the civic body in consultation with the top leaders for the welfare of the people.

“How will the SDMC function if Kejriwal doesn’t release funds? We need to work for people. Tax rates were increased keeping the welfare of city residents. There is no tax on income upto Rs 50, 000. Those who are earning more than Rs 50,000 will have to pay meagre Rs 100, Rs150, orRs 200 per month according to their income,” she said.

The executive wing of all three municipal corporations has been pressing for a hike in tax including property tax for more than a decade. The elected representatives turn down the proposals every time they are placed before the House or standing committee. Despite attempts, Gupta couldn’t be reached for the comment.

A senior Delhi BJP functionary said the act of ignoring leadership pertinently exposes the sad state of affairs in the party. “I believe that the goodwill and credibility of the present leadership is at all-time low. Surprisingly, the party is fighting for the rights of the middleclass population in the name of ‘huge’ power bill and at the same time, it is increasing tax rates and putting burden of a new tax when the coronavirus crisis has hit the same earning group badly,” said the leader.

Now we are on Telegram too. Follow us for updates
TAGS
Adesh Kumar Gupta