NCRTC begins pre-construction work on Sarai Kale Khan-Panchgaon route; construction likely to be over in 2022

NEW DELHI: If things go according to the plan, the residents of the national capital are likely to enjoy the ride of the much-awaited rapid train in the next two years or little more than, as the National Capital Region Transport Corporation (NCRTC) has begun the pre-construction work on the Sarai Kale Khan-Panchgaon (Gurugram) route under phase-II of the Delhi-Gurugram-Shahjana-Neemrana Behror (SNB) Rapid Rail Transit System (RRTS) corridor. 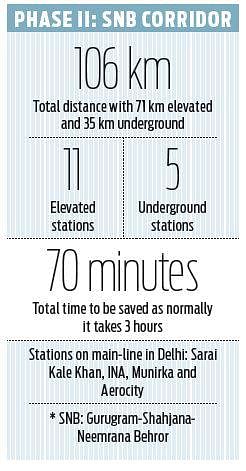 Under the phase-II, Delhi will be largely covered, with four stations at Sarai Kale Khan, INA, Munirka and Aerocity being constructed. The remaining stations at Udyog Vihar, IDPL Complex and Panchgaon are in Gurugram. The construction of phase-II under the ambitious project is expected to be completed in 2022. The construction work of phase I (Delhi-Ghaziabad-Meerut corridor) is already underway.

“The tender for main construction work between IDPL Complex and Rajiv Chowk has opened and under evaluation. Once the lockdown is lifted, the work of award will be passed by the centre and construction will begin,” said a senior official of the NCRTC. The pre-construction work under the Delhi and Gurugram regions such as designing, road-widening, utility diversion, pile load testing, a geotechnical survey among others has started.  The NCRTC has also floated for the project.

A detailed project report of the corridor has already been approved by the concerned state governments and is under active consideration of the Central government. The Sarai Kale Khan station is being developed as the country’s first mega transit hub where the three RRTS corridors will converge. The corridors will be interoperable for easy travelling and interchange facility so that passengers can travel smoothly.The Sarai Kale station will be an interchange station for line 7 of the DMRC and Hazrat Nizamuddin Railway station and Inter-State Bus Terminal (ISBT, Sarai Kale Khan).

While the INA station will be an interchange station between the Yellow Line and Pink Lines of the DMRC and Munirka will be with the Magenta Line of the Delhi Metro.The Aerocity promises to provide a seamless and time-saving corridor to the airport with an interchanging facility to the Airport Express Line and will be also integrated with the proposed phase-IV Airport corridor.  The trains will operate on an average speed of 100 kmph with services at a frequency of every 5-10 minutes.