Ajay Mathur, Director General, The Energy Resources Institute, and Ashish Dhawan of the Air Pollution Action Group have been appointed as representatives of NGOs.

NEW DELHI:  Former Delhi Chief Secretary M.M. Kutty was on Thursday appointed chairperson of the Commission for Air Quality Management in the National Capital Region and its adjoining areas.
The commission will look at measures to curb air pollution in the national capital and adjoining states.

Other members of the commission are Mukesh Khare of the Indian Institute of Technology (IIT), Delhi, Ramesh K.J., Ex-Director General, India Meteorological Department and A.K. Nautiyal, a joint secretary in the Environment Ministry.

Ajay Mathur, Director General, The Energy Resources Institute, and Ashish Dhawan of the Air Pollution Action Group have been appointed as representatives of NGOs.

Expressing concern over the pollution level in the northern parts of the country especially the national capital, the Centre on Friday said that it is working towards abatement of Air Pollution by working at the source level, be it industries or thermal power stations, vehicular pollution, construction and demolition waste or stubble burning, which are the major sources of pollution generation.

He also said that those found violating the ban on firecrackers can be fined up to Rs 1 lakh by the administration. Rai said the impact assessment panel will have five MLAs and officials from Indian Agricultural Research Institute, Pusa, and the Agriculture Department. 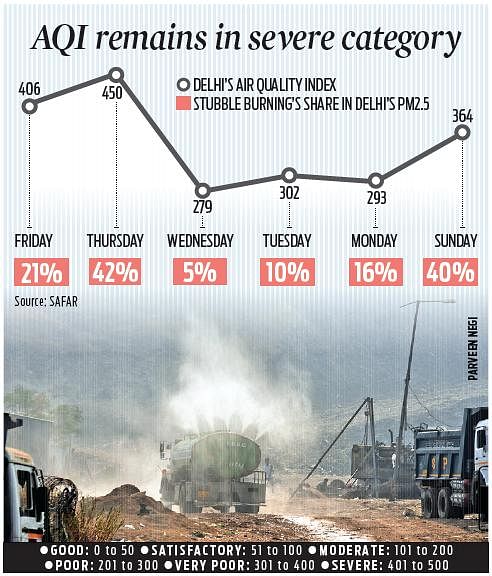 Now we are on Telegram too. Follow us for updates
TAGS
Delhi air pollution Delhi air quality