Citizens of Delhi found some relief from the ongoing air pollution on Tuesday as the air quality improved significantly to the ‘moderate’ category.

NEW DELHI:  Citizens of Delhi found some relief from the ongoing air pollution on Tuesday as the air quality improved significantly to the ‘moderate’ category.

As per Central Pollution Control Board (CPCB), the air quality index at 4 pm stood at 169 which is under the “moderate” category much better than Monday’s AQI of 221, which falls in the ‘poor’ category. According to experts, rain in the city and strong winds after Diwali helped improve the air quality and bring down the pollution level.

However, another weather quality monitor centre SAFAR, said that the AQI is likely to deteriorate and enter the ‘poor’ category again on Thursday. The city’s 24-hour average AQI was 435 on Sunday and 414 on Saturday.

“Surface winds are west-southwesterly and energetic, very favourable for pollutant dispersion. Rainfall along with stronger winds under the influence of western disturbance helped clean the build-up of pollution in the Indo-Gangetic Plain,” it said. 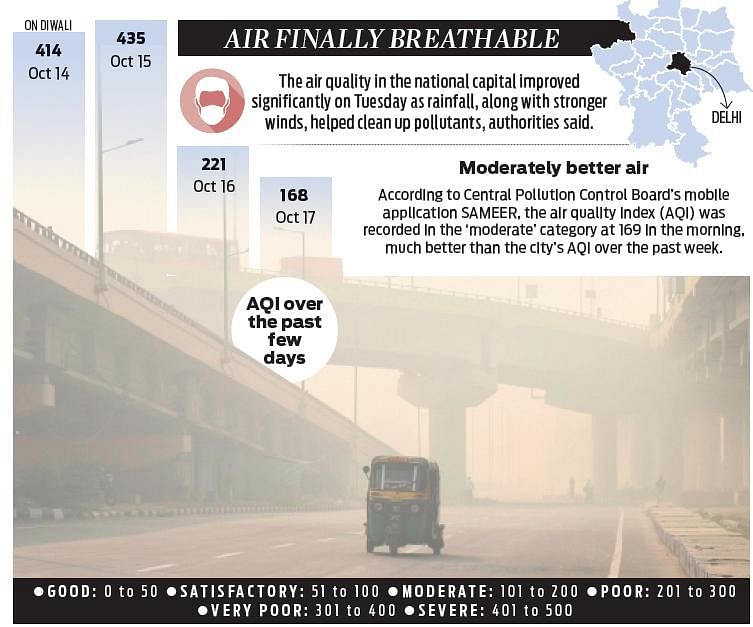 It also said effective stubble fire counts with sufficient potential estimated from SAFAR-multi-satellite products are significantly reduced to around 98.

“Boundary layer wind direction is North north-westerly. However, since the fire-related emissions have significantly reduced, a significant impact is not expected. Stubble burning share in PM2.5 in Delhi’s air is almost negligible and estimated at a marginal three per cent for today,” SAFAR said.

“Moderate rains to continue over Delhi NCR, result in decreasing the air pollution and will remain in moderate to poor category for at least next two to three days,” said private weather forecasting agency Skymet.

“Delhi NCR AQI dropped to the moderate category for the first time in November. This is the cleanest air for Delhi post-Diwali, in the last many years. All thanks to widespread rains and moderate winds,” Mahesh Palawat, a senior weather expert tweeted.

Pollution levels were higher in the national capital this Diwali as compared to last year due to bursting of firecrackers and stubble burning, according to the Central Pollution Control Board’s (CPCB) report.

Now we are on Telegram too. Follow us for updates
TAGS
Delhi Pollution Delhi Air Quality