Farmers broke barricades and entered Red Fort despite the presence of police personnel, who were significantly outnumbered.

NEW DELHI: The very spot in Red Fort where Prime Ministers have addressed India on Independence Day from, became a centre of unwanted attention on Republic Day. Agitating farmers barged into Red Fort and hoisted the Nishan Sahib, which is a symbol of the Sikh religion. It was seen fluttering a few metres away from the Tricolour.

Visuals of the incident and the Flag Code of India, 2002 — which governs the display of the national flag — made it clear that the Tricolour was not disrespected.  The mast where protesters hoisted the Nishan Sahib was empty.

According to the Flag Code, no other flag should be placed higher than or above or alongside the national flag. Visuals showed that the Tricolour continued to remain hoisted on top of the iconic Red Fort, which is a UNESCO world heritage site.

The incident came in for criticism from several quarters, with some describing it as an “assault” on the national flag. “Red Fort is a symbol of the dignity of our democracy. The farmers should have stayed away from it. I condemn the violation of this dignity. It is sad and unfortunate,” said Union Minister of Tourism and Culture Prahlad Patel.

Farmers broke barricades and entered Red Fort despite the presence of police personnel, who were significantly outnumbered. Some of the tractors were parked on the ground in the front of the monument and people could be heard raising slogans from the top of the fort.

Officials said it was a security breach, as agitating farmers had crossed around half a dozen barricades to reach the flagpole at the Lahore Gate ramparts, which was being manned by Delhi Police, CISF and a private security agency.

Paramjeet Singh Katyal, of Jai Kisan Andolan led by Yogendra Yadav, said: “The Sanyukta Kisan Morcha was not involved in this. It was done by miscreants and associations like Kisan Mazdoor Sangharsh Samiti and some government agencies.” He alleged it was done in a planned manner to brand them Khalistanis.

“To an extent, it happened the way the government wanted it to happen. We are criticising whatever has happened. I have been a part of several movements since the one started by Anna Hazare. And I have never seen people enter the fort. Moreover, it’s not easy to enter Red Fort.”

Social media was abuzz with many claiming that protesters hoisted Khalistan flag at the historic monument. It was later pointed out that the flag in question is the Nishan Sahib. A religious flag of the Sikhs, the Nishan Sahib has the ‘khanda’ (two-edged dagger) insignia. 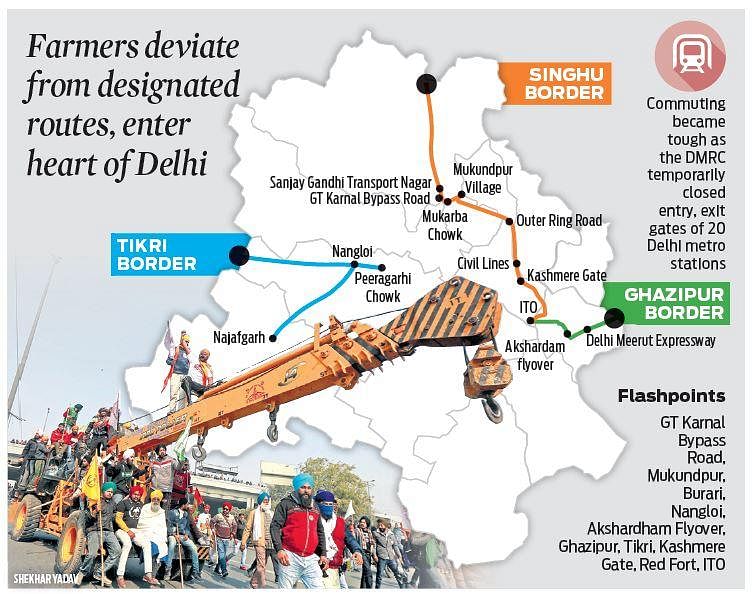