The phase-wise unlocking process in Delhi will begin after over six weeks of lockdown enforced in view of the second wave of COVID-19.

NEW DELHI: With the city about to be unlocked in a day, the tally of daily COVID cases fell below the 1,000-mark on Saturday, for the first time during the second wave which began around nine weeks ago. The city recorded 956 fresh COVID cases and the positivity rate stood at 1.19 per cent.

However, the number of deaths is still a matter of concern as 122 people succumbed to the viral infection in the last 24 hours. This is the fourth consecutive day when the daily cases count fell below 1,500-mark. While 7,111 patients were recuperating in home isolation on Friday, the number came down to 6,303 on Saturday. 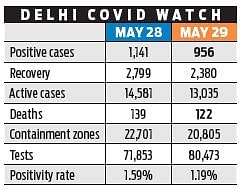 On March 23, the daily number of COVID cases had breached 1,000-mark after a long gap. Delhi witnessed 1,101 cases on that day, which was the highest since December 24 last year.

Thereafter, the tally and positivity rate began to rise gradually and the city witnessed spurt in cases in the second week of April and the situation deteriorated further.

CM Arvind Kejriwal had imposed a strict lockdown on April 19. On April 30, as many as 27, 047 new cases were registered which was the highest daily tally since the pandemic broke out in March last year.

The positivity rate of 36.24 per cent was highest when 26, 169 cases were logged on April 22. The hospitalisation rate has also decreased. At 8 pm on Saturday, a total of 23,027 beds reserved for COVID patients in hospitals were vacant including 19, 230 beds with oxygen facility.

Now we are on Telegram too. Follow us for updates
TAGS
delhi lockdown Delhi COVID Coronavirus COVID19