Cycling past the obstacles of life

26-year-old Shekar Goud is cycling from Leh to Kanyakumari. What’s the big deal - you may ask… except that he is disabled and has only two limbs

HYDERABAD: Shekar hails from Nalgonda and was studying a certificate course in Electrical trade from Industrial Training Institute (ITI).  On December 24, 2006, he was speaking on his mobile whilst sitting on a wall adjacent to an electrical transformer. Completely engrossed in the conversation, he slipped from the wall and was hung precariously between the transformer on one side and electrical wires on the other. In a split-second decision that changed his life, he held to the wires. When he awoke, he found himself in a mortuary. With great effort, he got himself admitted to a hospital. Doctors had to amputate his right arm and left limb, and the ensuing treatment cost him over `12 lakh. 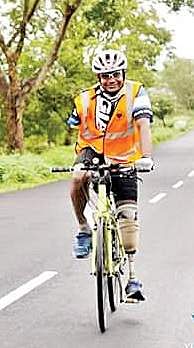 Despite the tremendous difficulty faced, Shekar did not give up hope, and started taking part in various marathons and cycling races. He ran for a 5-km Airtel Marathon with Jaipur foot artificial limb in 2013. Later, he was sponsored by Dakshin Rehabilitation Center of Hyderabad.

Shekar is currently in Madhya Pradesh taking part in a cycling event from Leh to Kanyakumari. He began the ride on October 24, and has covered over 1,000 km till date. He is using a Trek 7.2 Hybrid bike for his journey, serviced by Cykul, a cycling community with a mission of promoting an active lifestyle.
The Atlanta Foundation (TAF) has mobilised funds for Shekar’s journey, and selected him as its brand ambassador for the eighth edition of its Republic Ride event, to take place on January 26, 2017. A ‘Milaap’ campaign is also on for fundraising. Interested in contributing towards Shekar’s journey? This is the link: https://milaap.org/fundraisers/ShekarGoud.

Shekar desires of being a successful para-athlete, and is hoping the government comes to his aid in financing his dream. When he is not cycling, Shekar works as a CCTV in-charge at Lemontree hotel in Hitech City.

“Be it work or sports, people with disability are seen as being less effective in terms of their productivity. A general perception exists that they are weak. Through this ride, I want to spread awareness about how people with disabilities are no less than anyone else,” says Shekar. Salute to his indomitable spirit.