A rare mix of poetry, prose and Gond art, ‘Finding My Way’ is more than the life story of a Gond artist

HYDERABAD: Romantic poet William Blake often insisted on decorating the poems for the aesthetical experience of the readers’ eyes. That’s how the poet made an engraving for each poem in the collection ‘Songs of Innocence and Experience’, on a metal plate. It saw marriage of art and poetry. That was in 1789. And in our time, technology has simplified this marriage. That’s how Navayana brought forth its publication ‘Finding My Way’ a conglomeration of Gond Art, poetry and prose. The book is a collaboration of writer and publisher S Anand and Gond artist Venkat Raman Singh Shyam while they attended Sangam House International Writers’ Residency in 2013. This piece of artwork was launched recently at Lamakaan where both the artist and the writer-publisher discussed how they worked on the book. 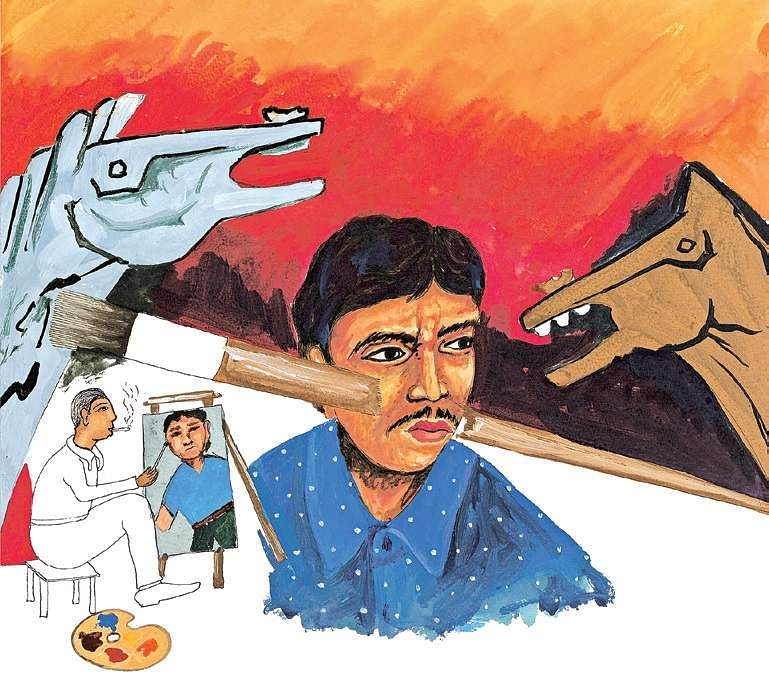 The pages of the book aren’t numbered and depict different colours, and stories each time the reader opens them. The timeline looks ever-fresh as the same isn’t just the life story of a Gond artist, it talks about the silent yet musical town Patangarh that envelops several Gond folk tales around its thatched roofs, green fields and serene walls painted with murals, an art that people of Gond are known for. The serenity of life flows with utmost simplicity in the colourful artworks of Venkat in this coffee table book. And it offers multi-dimensional glimpses of a nation, a race, juxtaposition of cultures, the Sisyphian work standing against the grandeur of art. Venkat shares, “Art takes its own form. It comes to you, communicates with you and takes shape.” A lot of art works done in acrylic ink and acrylic paint come alive with a lot of eyes painted in crevices and lines of the opuses.

The book is a living organism that breathes and draws people closer to the art which existed in the form of songs. Later, it took the shape of murals and changed according to seasons and festivals. This art is conceptual, philosophical and is not something realistic and lends itself to multiple meanings wrapped in layers. In fact, the book finds a way between western and rural world. That’s how one of the sub-sections reads very Walt Whitmanesque with its title pertaining to ‘Song of the Self’. To this Anand replies, “None of us are original. The verses of Kabir, Amir Khusro and even John Donne appear in the book.” The artist has connection with trees, rain, airplanes, escalators. He changes, yet remains the same. The writer, who has spent a few years of his life in Hyderabad, elaborates if the book is relevant to today’s changing political scenario. “The book also reflects on how Adivasis changed. They are now living in the present time and respond to current politics. Whether it’s Maoism or State, neither has any patience with this kind of art. There’s a larger ideology and agenda that probably doesn’t fit into this book. However, the book is very much set in the present,” he says. It took them almost four years to finish the work.

The book fuses Gond myth with present. That’s how one sees John Donne and Kabir appearing in one artwork replete with Anand’s fluid prose. One artwork talks about a proud woodpecker who was an artist. This bird challenges Death saying: ‘And death shall be no more’, gets intoxicated with rural wine mahua and is ultimately defeated. The artwork beautifully describes this story. And then the story ends with the bird reciting Kabir. Anand sums up, “Creature goes, but the art remains.”