Resting in peace and beauty

The cemetery in Zagreb, Croatia is not just the resting place for dead, it is also an open art gallery and an embodiment of fine architecture.

HYDERABAD: Inever dreamt of making an exclusive trip, of all the places, to a cemetery! For my Indian sentiments, visiting a cemetery doesn’t augur well; at least, not if my elders come to know of it. Moreover, it doesn’t figure on my “things to do” list. But when my guide Jurica Puskar reiterated that Mirogoj Cemetery is a “must visit” within cultural sight-seeing of Zagreb (capital of Croatia), being a culture freak, I gave in. 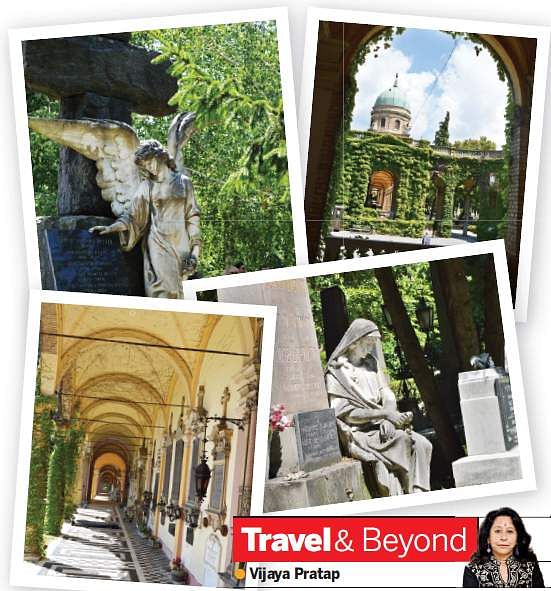 As I got down from the van, the quirky place I imagined turned out to be stunningly imposing.  Close to the city of Zagreb, it is said to be one of the most beautiful cemeteries in Europe. The dense ivy gives a supernatural look, which in fact matches the mood of the place. The majestic entrance projects a lofty image with arcades on either side. Jurica told me that many a famous Croatian is buried in the arcades and the place looks most picturesque in the autumn. I can imagine the colours lending further sensation to the whole place. I was told that on ‘All Saints Day’ at night, it is lit up with thousands of candles, giving it an ethereal look.

In Europe, during the 19th Century, ornate cemeteries came into being where the rich and the famous were buried. Situated in parks, these areas were originally visualised as picturesque, aesthetic and recreational. The Victorians were quite interested in death, and many of the themes are explored in the high style monuments of these cemeteries.

Mirogoj is not just a final resting place and an architectural treasure, it is also a chronicle of the history of Croatia. Many who have made their mark over the centuries - artists, politicians, sportsmen, writers rest here in peace. When it opened in 1876, Mirogoj was set in four main sections reflecting the city’s religious mix: Catholic, Orthodox, Protestant, and Jewish, later joined by Muslims. It is not only a burial place but also a beautiful park and an open art gallery, a veritable museum of architecture and sculpture, with pieces by renowned sculptors of the 20th century.

Hermann Bollé, the creator, was a well-known architect of French and German origins, who lived in Croatia for half a century and contributed hugely to its architecture. Considered one of his best creations, the Mirogoj Cemetery has magnificent arcades, cupolas, central porticos all of which is governed by lovely greenery. The Neo-Renaissance style of the cemetery is distinguished by symmetry, balance, clear perspectives, a right division of lights and shadows giving it almost a contemporary look.

There are free standing graves and tombs, but many of the best are in the two huge galleries that run the length of the cemetery. In the centre is the main gate and church which makes a very handsome entrance to the complex. Lime-green cupolas top the wall that surrounds the memorial park. In the vast gardens, each tomb is accompanied by either an angel or cherub or some such heavenly creature. That explains the expression, ‘so and so reached his/her heavenly abode’. Maybe that is the reason why I didn’t see any tomb with the slightest hint of hell. Nearby is the mortuary, right across the road.

We spent a good time walking around, admiring the sculptures on old graves and it made me philosophical. I was glad I deviated from the much clichéd “things to do” list, for a change. This is one place in Zagreb which inspires both sorrow and awe at the same time, where reverence and admiration of art go hand in hand. After the cemetery visit, far from getting depressed, I came back elevated and enlightened. If the dead could lie in peace surrounded by beauty, doesn’t it make the sorrow less painful for those left behind?

(The author is a documentary filmmaker and travel writer; blogs at www.vijayaprataptravelandbeyond.com)