After the Pandavas and the Kauravas complete their education in Drona’s forest school, a colosseum is designed for them to display their skills.

HYDERABAD: After the Pandavas and the Kauravas complete their education in Drona’s forest school, a colosseum is designed for them to display their skills. On the designated skill-show day, there are ‘thousands’ in the stands. The event is, in fact, one of the rare moments in the Mahabharata when Kuru royalty shares space (however big) with those they govern.

First, Bhima and Duryodhana ready themselves for a duel with maces. But the crowd, delirious with excitement, is divided in support. The schism in the population is so apparent (and, one assumes, loud) that there is a risk that there will be violence in the stands. Drona thus instructs his son, Ashvatthama, to stop the duel.

In this we see a rare instance of a different kind of political action in the Mahabharata, a kind that is driven not so much by palace intrigue or the rivalry of princes or brahmans’ curses, but by a regard for the general management of the masses.

Arjuna’s spectacular display of skills follows, and one can sense it instilling fear in Duryodhana and his brothers.

Therefore, with the arrival of Karna, Duryodhana’s immediate impulse is to befriend him. Karna challenges Arjuna to a duel.

Before they start, Kripa asks Karna for his lineage, thereby giving Arjuna the option not to fight with Karna if he were to deem him of an inferior birth. Responding to this, Duryodhana proclaims that Karna be instated as king in the land of Anga. 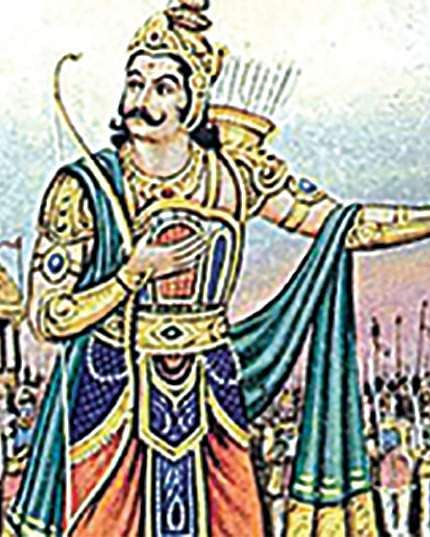 A surreal scene follows, in which the very next instant sees Karna instated the king of Anga. ‘He was seated on a golden seat, an umbrella was held above him and whisks were waived at his side.’
This ceremony is conducted right in the arena, before the masses, and one realises that it is, indeed, conducted for the masses. Chants of “Victory” follow this coronation; and there is no doubt that it is Duryodhana’s victory that is being cheered.

Duryodhana has an innate sense of what the masses want, and is not afraid to shed conservatism for the same. Bhima chooses to insult Karna again, suggesting that he belongs to the lower castes: ‘You’ve no right to enjoy Anga, just as a dog has no right to eat the cake at a sacrificial fire.’ In
Duryodhana’s angry response to this, his political genius bursts forth.

He mentions the strange births of Drona, Kripa, and the Pandavas, themselves, and makes a general comment about the how the sources of some kshatriyas might not be known. He also refers to how, sometimes, born brahmanas became kshatriyas.

Although Duryodhana uses Karna’s own skills as proof that he is not from the lower castes (new readings of the epic should annihilate this very point, but that is another article), there is a movement away from caste and towards merit in his speech that is discernible and praiseworthy.

The crowd applauds uproariously, and we sense what their thoughts on these issues are.