The Hyderabad High Court has sentenced one K Prabhakar Reddy, a builder from Manikonda, for two months of simple imprisonment and a fine of `2,000 in a contempt case.

HYDERABAD: The Hyderabad High Court has sentenced one K Prabhakar Reddy, a builder from Manikonda, for two months of simple imprisonment and a fine of `2,000 in a contempt case.

Justice C Praveen Kumar allowed the contempt case filed by the Manikonda Gram Panchayat by sentencing the builder for disobeying the orders of the court. 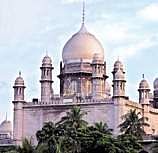 As for the case, the builder had approached the High Court in 2013 challenging the notice issued for demolition of his building. He urged the court to direct the Manikonda Gram Panchayat not to demolish his residential complex at Manikonda.

The court granted stay of demolition and ordered that the petitioner shall not use or put to use the offending structures for occupation and he shall not make any constructions.

After perusing the report, the judge held that the conduct of the builder has undermined the majesty of the High Court. “I  feel he (builder) must be sentenced with simple imprisonment for two months besides paying a fine of `2,000”, the judge said.

Now we are on Telegram too. Follow us for updates
TAGS
K Prabhakar Reddy