Dearth of funding ensure shutting down of Russian, German, French and Tamil departments

HYDERABAD: Language departments, some almost as old as the university itself are dying a slow death in Osmania University.  Earlier administrators had a vision for making the university a place to learn and study all languages and cultures that comprise Hyderabad.

However, a century since the university was established, the current administrators of OU as well as state government do not seem much interested in preserving these departments.

Four language departments in the university - Russian, German, French and Tamil - have already been shut down in the past few years.

OU is one of the few state universities in the country to have as many as 13 departments dedicated to languages - Telugu, Urdu, Sanskrit, Hindi, Kannada, Marathi,  Tamil, Arabic, Persian, Russian, German, French and English. 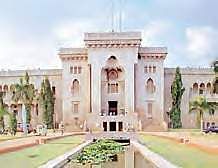 Two reasons emerged after speaking with the faculty members from these departments as to why language departments are faring so poorly - shortage of faculty due to non-recruitment and few students applying for the language courses.

Kannada department has just a single faculty, Dr M Lingappa. He says, “Kannada department in OU was once a much sought after department. Eminent scholars, like GS Shivarudrappa - third person to have been titled Rashtrakavi by Karnataka government have worked here.”

“Over the years the number of teachers declined due to lack of recruitment. The applicants from Karnataka also dwindled as many colleges and universities sprung up in Karnataka-Telangana border areas.”

He added, “If the faculty is increased by attracting good talent and enough promotion is done, the department can try to regain its old glory.”

Language departments in OU are not known for conducting well known literary activities or workshops and the reason is insufficient financial support from university.

Dr Badiuddin Sabri HS, of the Arabic department says, “In all departments the number of seminars and other activities has drastically reduced over the past years. We do not get enough money from the university to have such events. Dearth of faculty has hampered the scope of university to get money from the University Grants Commission (UGC). We did not receive second phase of money from UGC under the Special Assistance Program.”

Namrata Bagde, head of the Marathi department says, “Conducting literary activities on a large scale is out of question. The maximum we get when requested is around `15,000. We plan to promote our department by ourselves in Maharashtra. However, shortage of faculty will prove a deterrent in attracting students. It also affects the image of the department if we want to tie up with some other well known university.”

In 2004, OU scrapped Urdu from PG College Secunderabad. There are fears that the same fate might befall urdu department in the OU.