I am a deep thinker

“Forget about the war sequence, there is a scene where you can see a waterfall above the clouds. Even Hollywood wouldn’t have created such a grand visual. Karan Johar was surprised,”
says  Prabhas

HYDERABAD: He asked for okka adugu in Chatrapathi, but ended up conquering the hearts of the entire world with Baahubali. Thanks to his dedication and trust in his Kattappa – Rajamouli, Prabhas is now the poster boy of war-drama genre. As his fans get ready with garlands and confetti, the actor is doing his bit of upping the hype with his participation on the promotion spree.

This handsome ‘Raju’ ditched his armor and walked into the interview room with a swag  – in a linen hoody, promoting handlooms and comfort clothing effortlessly.

This otherwise shy and reticent actor opened up about himself and his experience of working with his confidant Rajamouli in this magnum opus, which not just elevated his career graph, but also took Indian cinema a few notches up in the international league.

Not so social:
Telugu film fraternity and the audience are well aware of the fact that Prabhas likes to maintain a low profile. Forget about being social, he is not even on social media. Admitting that he is shy innately, this six-foot-tall hunk says he has been working on it for the last two years. 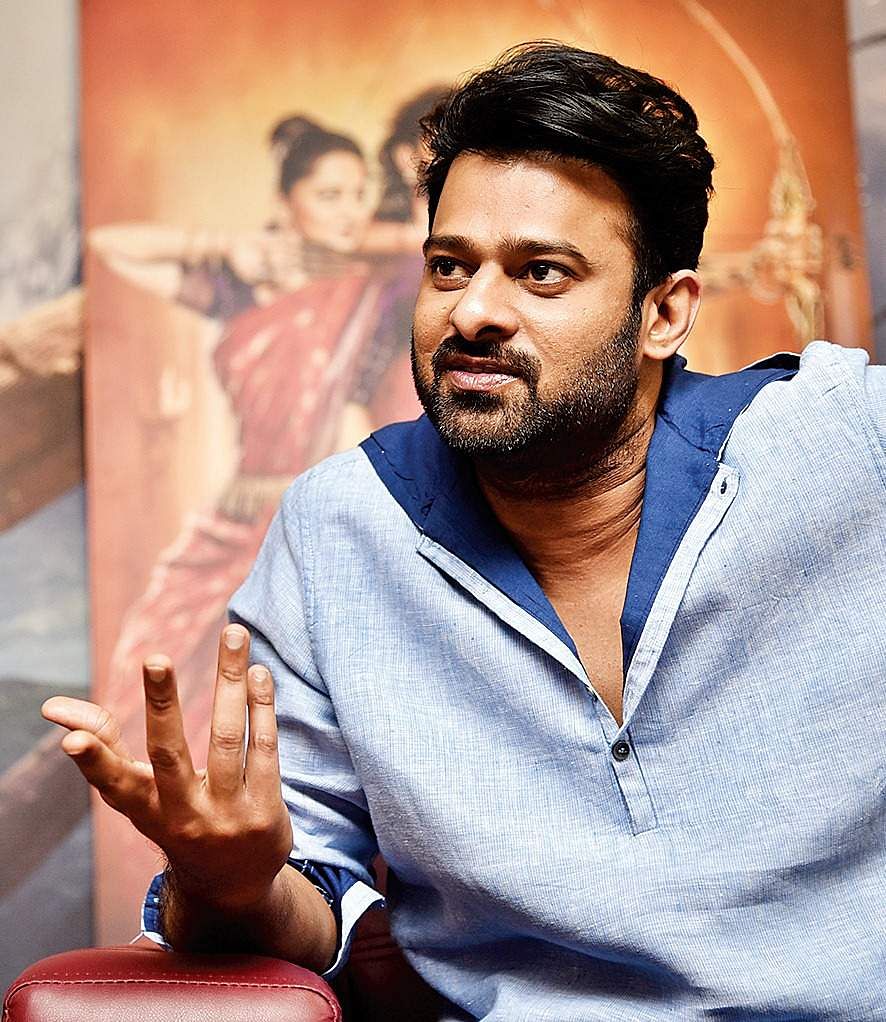 “I am born shy and my friends were in shock when I told them I was taking up cinema. As a kid, I saw my dad as a producer and uncle as an actor and wondered how they manage to do all of these in front of so many. In fact, they once asked me if I would like to be a child actor, I said no with a straight face. I am opening up these days, but I can never be an extrovert,” he confesses.

Fantastic Five:
Prabhas is a foodie and rated as one of the most eligible bachelors with more than 5,800 marriage proposals on his way. But this news is out in the open for a long time.

So what are the five secrets of Prabhas the world should know? Pat comes the reply, “I am extremely lazy. I need to be entertained always and so I  surround myself with some form of the entertainment or other like – music, movies, games etc.”  He goes on to reveal more.

“There seem to be two people inside me. I sometimes become the person who takes a  holistic approach in making even a small decision. At other times, I become the one who is too lazy to think and forget to take a decision. It baffles my friends,” he adds. “Then, I am a deep thinker and no one knows about it. Until last year, I didn’t know but I guess I am emotional too,” he added.

So we prod none other than Amarendra Bahubali, the five reasons one should unquestionably book tickets for Baahubali’s conclusion.

“There can’t be a better visually extravagantmovie like Baahubali 2. The characterisation of every role is rich and novel. There is intense drama – the USP of the film. The conclusion is surely going to bring smiles on everyone’s faces. There is a beautiful visual song in the movie, which is my personal favourite too,” he expresses with joy and clarity.

Yaadien Yaadein:
Prabhas is scared that he will  miss out shooting for the film. “I haven’t moved on after wrapping up the shoot of Baahubali. When it hits me, I am sure to get emotional.

Even veteran actors got emotional when the shoot concluded. We all have decided to keep in touch in one or the other form and have reunions once in a while. It’s a soul-stirring film for all of us,” Prabhas informed in a hopeful tone. The team has been working together for over five years now.

Bahubali-Kattapa:
Well, the Kattappa here is not Kollywood star Sathiyaraj, but Rajamouli who chiselled Prabhas into a fine actor he is today. “Rajamouli and I have known each other for more than 12 years now. He is family.

The entire set works responsibly only because of his passion-turned-madness in making this film. Yes, we do have our fights, but his angelic smile is all it takes to calm me down. I find warmth and solace in his smile. He is a mixture of Alexander and Buddha,” he shared with deep emotions in his heart and words.

Supplementing the statements about Rajamouli, Prabhas went on to add, “Rajamouli has a lot of vices. He doesn’t drink, smoke or indulge in any frivolous talks. (laughs). Once Rana offered him a drink and  Rajamouli avoided it witty excuses. Rana explained to him how it could calm his frayed nerves after having one drink, but still, he stuck to his words and did not even take a sip. He only drinks once in a year,” he shares about his favourite director.

Recalling part one:
“We were so tensed during part one that we were all zoned out. The producers invested a fortune which will take a lifetime to replenish. The movie has to be a blockbuster to save everyone who worked on it. With the kind of response we received for part one, we are slightly relaxed for part 2,” Rajamouli’s blue-eyed boy vocalised.

It’s drama, Rama:
We have enjoyed watching classics such as Paatala Bhairavi and Mayabazar. We have experienced Moghul-e-Azam and Anarkali, but Baahubali will stand out.

The star himself explains to us why. “It’s not a war film. It’s a drama film with war scenes. It is a period film with strong action. I haven’t seen visuals like this in any film. Forget about the war sequence, there is a scene where you can see a waterfall above the clouds. Even Hollywood wouldn’t have had created such a grand visual. Karan Johar was surprised and thought it could overshadow Avatar. It is bound to be an international blockbuster,” he informed.

Gifting time:
While other actors in this film managed to sneak in a few movies, Prabhas dedicated his entire time for Bahubali. He said all he could do for his director and his ocean-like mission is give time. “I didn’t want to take a break for some other movie.

I wanted   the character to sink into my heart and flow during the shoot. The war scene was planned for 80 days, but it took 120 because of injuries and other hindrances. I didn’t want the flow to be disrupted because of external factors,” he concluded.
Baahubali: The Conclusion releases across the world on April 28