Hyderabad SHE teams arrested a cab driver for showing his private parts to a tourist, a Bengaluru-based woman software engineer, while dropping her at Secunderabad railway station.

HYDERABAD: Hyderabad SHE teams arrested a cab driver for showing his private parts to a tourist, a Bengaluru-based woman software engineer, while dropping her at Secunderabad railway station.

The accused, a 40-year-old, working for a travel agency dared to the embarrassing act in the cab, despite the presence of the woman’s parents in the back seat of the cab.

The woman tourist from Kerala had come to Hyderabad for a three-day tour along with her family in the second week of April.

The techie engaged a cab through a city based travel agency for city tour. On the last day of their tour, when the family was returning to Secunderabad, the techie was sitting beside the driver’s seat, while her mother, father and uncle and aunt, occupied the rear seats. 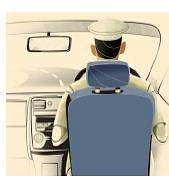 When the car reached Ramanthapur area, the driver suddenly unzipped his pants and started showing his private parts to the techie. Shocked to see that, the woman screamed at the driver and asked him to stop the car. But he refused and repeated the act.

As the woman continued to scream, the driver stopped the car. She got down from the vehicle and narrated the incident to her family members, who were unaware till then. When they questioned the driver about the degrading act, he attempted to drive away with two women in the car.

The men resisted the driver from fleeing but he managed to throw their luggage on the road and fled from the spot.

“The woman was in shock and could not lodge a complaint immediately, as she had to catch a train back home. After gaining senses, she complained about the driver to the travel agency and then sent a complaint to the SHE teams through the WhatsApp number,” said Swati Lakra, additional commissioner (Crimes & SIT).

The officer said that SHE teams officials spoke to the complainant, booked a case and then collected the details of the cab driver from the travel agency. The driver, identified as Mohammed Saleem (40), a resident of Pahadishareef was traced and arrested on Tuesday.

“Women need not suffer in silence. Hyderabad SHE teams is only a call away. All the details of the complainant will be kept confidential to ensure their privacy and safety,” said Swati Lakra.

Now we are on Telegram too. Follow us for updates
TAGS
Hyderabad cab driverarrested