William Dalrymple, historian and author of ‘White Mughals’ recounted the forgotten days of the British Raj, the romantic  tale of James Kirkpatrick and Khairunnisa Begum and the history behind their h

HYDERABAD: On April 18 (International Day for Monuments and Sites), the “British Residency” in Hyderabad glowed in soft light. The newly renovated look gave the monument, a charming appeal. Assembled for a celebratory event in the premises, audience gazed with wonderment as the edifice proudly basked in the restored glory.

The imposing edifice boasts an opulent facade of massive Corinthian pillars 40 feet in height. Two lions guard it across a 60 feet space of 21 marble stairs.

As a former British Residency, it weaves its own mystique with galleried halls and drawing rooms, a Durbar Hall of stupendous proportions, painted ceiling, parquet floors of inlayed wood, flanked by tall mirrors. More popularly known as Koti Women’s College, the massive campus with ancient trees, gives a sheltered space in the midst of a bustling commercial world drowned in noise, pollution and chaotic traffic.

Under the cascading Ashoka trees in the courtyard, a rich tribute was paid to our history and heritage with an elegant artistic display of song and script marking the event - “Reviving Residency”. 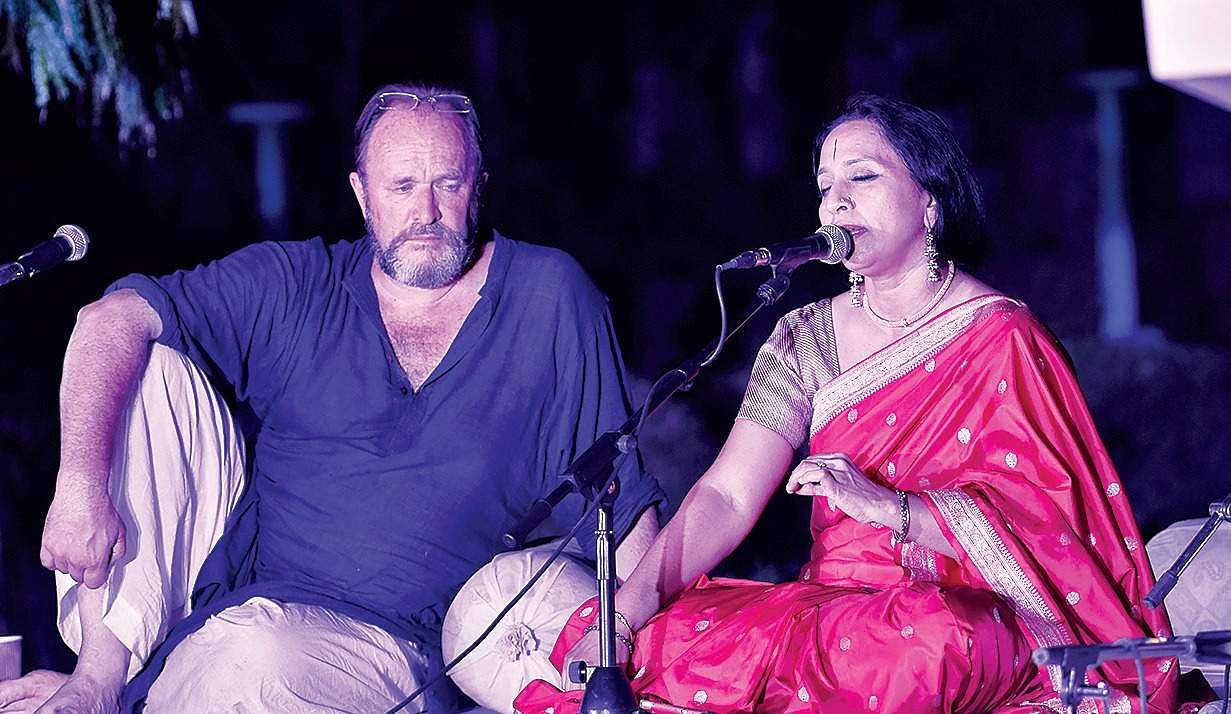 William Dalrymple, historian and author of ‘White Mughals’ recounted the forgotten days of the British Raj, the romantic tale of James Kirkpatrick and Khairunnisa Begum and the history behind their home, the British Residency.

Kirkpatrick had not only converted to Islam to marry his Indian lover Khair-un-Nissa, mother of his two children, but also wore Indian clothes, spoke Persian, and wrote Urdu poetry.
Dalrymple’s talk was supported by visuals displayed on a screen, of mostly paintings. Vidya Shah’s music further added to the aura and aided in creating the ‘period’ ambience.

The long journey of William Dalrymple that started in 1998, with a visit to the Residency in Hyderabad, had resulted in a book, ‘White Mughals: Love & Betrayal in Eighteenth-Century India’.

What has been hidden in a trunk for 200 years, found a redeemer in the form of Dalrymple but his passion seems to continue: reminiscing and retelling the romantic, yet sad story of Kirkpatrick and Khairunnisa.

One wonders if Dalrymple is in love with their romance, or the Residency or the Raj era?
Flagging off the first stage in the conservation efforts, Dalrymple said, “I am keen to help to raise funds to restore this extraordinary building which needs Rs 12 crore more to complete the restoration. It is the greatest colonial building in the South of India.”

Speaking of ‘White Mughals’, he said, “It is the forgotten history of British interaction with India, when the British who were posted here were developing extreme fondness for this country, it is the story of Kirkpatrick, how he built this building. It is also the story of his love, how it fell apart and how Victorian racism destroyed it.

These are morality tales for our times. If you are not careful, hatreds can grow, partitions can take place, irreparable divisions can be caused.” (Well, it has happened. Partitions took place, irreparable damage has been done, which sadly, we are unable to set right even after 70 years!).

Talking of his tryst with the Deccan, he recounted the experience of another visitor, Jacqueline Kennedy Onasis. Quite familiar with India, she visited Hyderabad in 1984 for the first time while working on the publication of a book ‘A Second Paradise’ (by Naveen Patnaik).

In an extraordinary letter about her visit to Hyderabad, she wrote, “ I never knew what the Deccan was, just large letters in the middle of the map of India. We had an evening with the old noblemen of the Nizam’s court: men with long, white hands, transparent like alabaster. They recited Urdu poetry, one of them a former ambassador, still sends me translations of his poems in English.

There were these three ancient classical musicians playing in the moonlight and there were the noblemen speaking of how it was all disappearing- the old culture in an over civilised, rarefied world. The evening was profoundly sad.

My son John told me the next day that the sons of the house had taken him to their rooms because they couldn’t stand the classical music and offered him a tall glass filled with whiskey and put a pornographic cassette on the Betamax and Rolling Stones on the tape deck. Their sons wore tight pants and open shirts while their fathers on the terrace were in sherwanis, speaking of how sad it made them. Ali Pasha’s son disappeared the year before on a motorbike because he didn’t like the marriage, which had been arranged for him.”

Dalrymple said,”This world, which Kennedy saw in 1984 were the last remnants, the last wreckage to survive from the sinking of the mixed Indo Islamic Deccani cultural universe, the first of which came into being in the 13th century with the Southern conquest of the Delhi Sultans.”

An overwhelmed Vidya Shah said, “ I realised the richness of Deccani poetry and it is absolutely riveting and exciting!” She opened with the poetry of Ibrahim Adil Shah II from his Kitab-e-Navras, which he wrote based on the theory of nine Rasas. The book occupies an important place in Indian aesthetics, to acquaint people who knew only the Persian ethos. The book opens with a prayer to Saraswati, the Goddess of learning followed by a prayer to the Prophet. bhaka nyari nyari bhava ekkaha turuk kaha barahaman“Whether a Turk (Muslim) or a Brahmin with different language-emotion is the same.”

nouras soor juga joti ani saroguniyusat sarasuti mataibrahim parasada bhayi dooni
“Oh mother Saraswati! Since you have blessed Ibrahim, his work Navras will last for long”
Vidya said that in the course of reading these verses she came across one more dedicated to Ganesha and she had taken it up as her opening piece.

Her rendering of Quli Qutb Shah’s famous ghazal “ Piya baaj pyaala piya jaena…” was melodious and apt for the romantic mood that had set in.

The courtesan poetess Mahlaqa Bai Chanda’s 127 year old song on spring had rich imagery woven into it, proclaiming that it is a moment of celebration. The description of blossoming buds, fully blown flowers, the heady fragrance intoxicating the lovers in the bowers, the chirping birds, dancing peacocks, all this made one long for a cool breeze to set in. With the Deccani lehza being very prominent in the song, it was a rich play of words. Vidya spoke highly of the extraordinary personality of Mahlaqa and the respect that she commanded.

East and West have not only met Mr Kipling, they have merged beyond distinction. Today English is a major part of our lives, western culture has seeped into our veins; Yoga and turmeric found place in Western homes. Is that Kipling, smiling in his grave?