Explore Na Prikope, a street in the centre of Prague, learn the story of Moser glass and its founder Ludwig Moser

HYDERABAD:  My love for crystal glass dates back many years. The countless visits to Salar Jung Museum (Hyderabad) as I was growing up, always made me linger at the gallery for a long time, gazing at the lovely coloured glass and the dainty works of art.

Later, when I was commissioned to make a documentary film on the museum, I ensured that my cameraman captured all that loveliness in splendid frames for posterity. While I admired the exquisite chandeliers, vases, wine goblets etc, even on the editing table, it is needless to say that I retained most of the shots. The same beauty I found in the crystal of many palaces in India.

Recently I visited the Moser Art Gallery in Na Prikope, a posh boulevard in Prague with old palaces and luxurious shops. Monika showed us around, elucidating on Moser’s history and their celebrated creations.
For over 155 years, Moser crystal glass has decorated royal palaces and celebrity homes throughout the world. 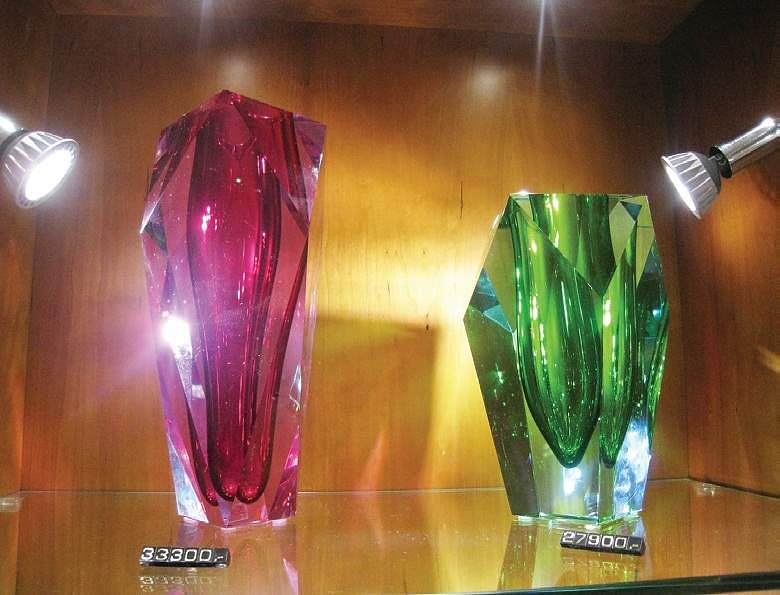 The success of Moser Glass lies in the production of ecologically friendly lead-free crystal, specially designed and made by hand. I notice that their colours are most pleasing and unique. Monika said that their ‘Formula Bank’ currently contains 450 colour shades of glass. The secret lies in combining the highest quality raw materials which are melted with an admixture of precious soils and metal oxides.

Exclusive Moser colours are derived from semi-precious minerals and are characterised by specific shades, resulting in various colour combinations. Typical Moser range of colours are overlay and underlay colours such as amethyst, rose, blue, aurora (orange), reseda (yellow-brown), and green. A lovely emerald green decanter caught my eye, but when I saw the price and quickly converted it into rupees (one lakh and ten thousand!!), my heart missed a beat and I looked away from the temptation.

Their popular alexandrite (light violet) changes its intensity and colour shade from bluish to dark violet depending on the type of lighting. To illustrate, Monika held a huge bowl under two diverse lightings in two different rooms and dramatically the bowl changed colours. While it was amazing, it dawned on me that one can show off two bowls for the price of one, considering that each costs a fortune! Ludwig Moser (1833 - 1916), the founder, hailed from Karlovy Vary in Western Bohemia (part of earlier Austro/Hungarian Empire), with abundant natural resources, famous for its beautiful and colourful glass. After an apprenticeship at the workshop of a renowned glass engraver in Karlovy Vary, he set up his own shop, selling exquisite glass goblets and centre pieces.

He developed a hard and more ecologically friendly lead-free sodium-potassium glass, which is tougher than lead glass. Within a short time he gained the reputation as the most prestigious producer of crystal in the Austrian-Hungarian monarchy.

He became the imperial court supplier of Franz Josef I, Persian Shah Musaffereddin and King Edward VII of England, which enhanced the reputation of his crystal and triggered a keen interest in other politicians and emperors as well. An entrepreneur with an ability to follow stylistic changes, by 1922 his Moser glass manufactory became the biggest producer of luxurious drinking and decorative glass in Czechoslovakia.

Moser sales gallery in Prague is as classy as the glass itself. It is housed in the Black Rose Palace (since 1934), one of the best known icons of the Czech architecture. The coloured window-panes (protected by another glass window pane) almost miraculously survived both the World Wars.

Some remarkable architectural elements are its original wooden ceiling, wall facing, painted windows, Dutch stove, chandeliers etc. Most expensive ebony, ash, white oak were used for carved and wood inlayed surfaces. Some original chandeliers, tables, armchairs and rosettes (of the original richly carved ceilings) are preserved from 1888. The rooms are protected as historical monuments and even the smallest interior alteration is subject to the approval of the National landmark institute in Prague.

Moser glass had seen it all, like royal weddings being celebrated to significant pacts being signed. Travelled with wealthy brides as part of their dowry, slipped from many a soapy hand, and watched poor staff being fired.

My companion almost knocked down one wine glass, while excitedly posing for a picture next to a gorgeous set. He was saved luckily; it didn’t crash on the ground, instead, made a gentle landing on the soft table cloth. Monika gave a polite stern look, you know why. When we were served soft drinks in the Moser glasses, I held mine most tenderly, like I would a new born baby.

(The author is a documentary filmmaker and travel writer; blogs at www.vijayaprataptravelandbeyond.com)