Man jumps to death from Gandhi Hospital building in Hyderabad

There is no stopping for government hospitals hitting the headlines for all the wrong reasons.

HYDERABAD: There is no stopping for government hospitals hitting the headlines for all the wrong reasons. Even as there is a commotion over the tragic death of four women at Maternity Hospital, Sultan Bazaar, a person committed suicide by jumping from the Gandhi Hospital building here on Sunday. The 45-year-old man was suffering from chronic neurological problems, police said. The deceased was identified as Giri, hailing from Nizamabad district. 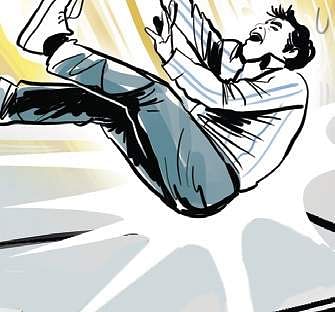 Chilkalguda police inspector Harish Koushik said Giri was operated by doctors at Gandhi Hospital in 2015 as he was suffering from a mental disorder and was depressed. Since then, he has been visiting the hospital for regular check-ups.

Preliminary probe revealed that Giri’s son was not taking care of his father after the demise of Giri’s wife recently. “Giri was living alone and no money for his treatment. Depressed over financial issues and family problems, Giri committed suicide,’’ the police said.