Extensive herbivore estimate is part of a recent scientific prey-counting exercise at ATR which says the reserve has 13 tigers and 356 prey species now.

HYDERABAD: After finding the presence of at least 13 tigers and 356 prey species in the Amrabad Tiger Reserve (ATR), the state forest department has estimated that the present prey population can support 32 to 40 tigers in the next few years.This extensive herbivore estimate is a part of a recent first-ever scientific prey-counting exercise in the tiger reserve which is spread over Amrabad and Udimilla in former Mahbubnagar district that has given a new hope to the department.

During the 110 days of data collection period, several researchers and forest field staff encountered a total number of 417 herbivores, of which 356 were of the prey species, mostly sambar, chital, nilgai, chousingha, pig, langur, sloth bear and chinkara. The survey indicated the presence of approximately 5,200 sambars, 5,700 chitals, 600 nilgais, 1,500 chousinghas and about 3,100 pigs in the core area.“Data collected through this prey population exercise involved the study of herbivore encounter in 23 line transects of 3.2 km each,” said MC Pargaien, field director, Amrabad Tiger Reserve. 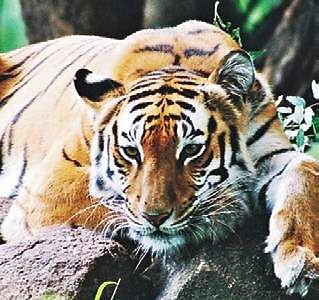 According to him, the survey is an  annual monitoring of tigers as per the directions of National Tiger Conservation Authority. First, the number of tigers is assessed using trap cameras to ascertain both minimum numbers of tigers and tiger densities. Second, the number of prey including the principal prey like sambar, chital, nilgai and wild pig species is assessed through transacting analysis under the supervision of field scientist.

The official said that it would be the endeavour of the forest department to continue and scale up various management initiatives to improve the prey base to accommodate a growing population of tigers. “There are at least 13 tigers and, as per an estimate, their population ranged between 14 and 20. The recent sighting of two sub-adult tigers has proved the suitability of the habitat for tigers,” he said.

Imran Siddiqui of Wildlife Conservation Society said, “If proper steps are taken, Amrabad can support a population of up to 70 or 80 tigers.”

No tigers in Kawal Reserve

While it is estimated that ATR will be home to more than 70 tigers in next couple of years, another tiger reserve in TS, Kawal Tiger Reserve in  Adilabad district, remains ‘tigerless’ for the second time in a decade. “In 2015, a male and a female tiger from Tadoba Andhari Tiger Reserve migrated to KTR and they went missing in November last year,” said a senior forest officer.

Now we are on Telegram too. Follow us for updates
TAGS
Amrabad Tiger Reserve Forest Department prey population