Summoned but not guilty, says Tollywood

Actors condemn media for taking their names without cross-checking. City-based event manager latest in the list of those arrested.

HYDERABAD: A Hyderabad-based event manager, who had allegedly turned his home into a drug-manufacturing lab, was arrested by the sleuths of anti-narcotics cell of Prohibition and Excise department on Friday. The accused reportedly mixed various anti-depressant pills to prepare the home-made drugs.
Police seized huge quantities of fake LSD, cocaine and ganja from Piyush Alak, who had extensively researched about making drugs at home. 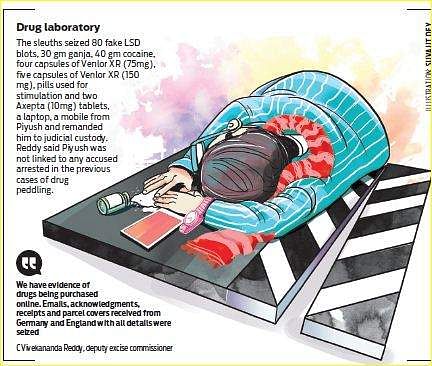 What shocked the sleuths was that the accused used Venlor (antidepressant), stimulating pills Axepta and other substances, to prepare fake LSD.Speaking on the issue, deputy excise commissioner C Vivekananda Reddy said: “Piyush got addicted to ganja during his college days and slowly moved on to LSD. With help of the internet, he researched about the side effects of LSD. Based on that, he manufactured fake LSD using other pills at his home.”

Piysuh, currently into event management, had earlier in November lost his job as a structural engineer. He had earlier purchased some drugs online from Germany and England. “We have evidence of drugs being purchased online. Emails, acknowledgements, receipts and parcel covers received from Germany and England with all details were seized,” said the deputy commissioner.

Preliminary investigation confirmed the sources of drug procurement, but the end users have not been identified yet. “We are sure about his sources but the persons who are purchasing are yet to be identified. He is selling drugs through his friends Addi and Vijay, who are yet to be nabbed,” said Reddy.

Now we are on Telegram too. Follow us for updates
TAGS
Tollywoodanti-depressantProhibition and Excise department