Of being and connecting with a child

The concluding day of the International Workshop on ‘Creative Pedagogy & New Educational Strategies’ began with the above poem by Emily Dickinson, which was quoted by acclaimed storyteller Godi Keller.

“A school has two tasks - preparing kids to live in the world, and to enable children to change the world for the better”, said Godi. A teacher or a parent must be an enigma to a child, he/she must pique the child’s interest and make the kid learn on its own, he pointed out. 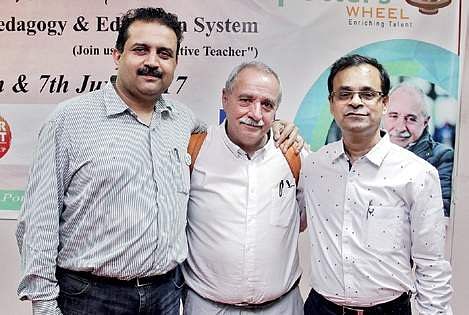 On a question from the audience on the intense rat race, Godi said, “Competition does not work in schools, especially the ‘marks’ aspect. Giving bad marks affects a child’s self-esteem, which is a vicious circle”.

It was time for an activity. We were grouped into pairs of four and given names A, B, C and D. A’s role was to tell a story in two minutes, which B would repeat it verbatim. C had to elaborate on the emotions and body language of A during the story’s narration, and D had to figure out why on earth did A choose to tell that particular story. The participants had a wonderful time and later shared their learnings with all.

This activity was exclusively for teachers and parents, Godi added.

Technology has no chance against your presence and being with the child, Godi Keller said matter-of-factly, on the prevalence of kids being addicted to smartphones these days. He peppered the session with witty anecdotes, like how teachers need to be ‘marinated’ to enable them to perform more effectively in classrooms, how conflict between two kids snowballed with their parents’ getting involved, and many other examples.

Later, CCE Finland’s Head of Strategy Heramb Kulkarni spoke about the various techniques of engaging kids in the classroom. He elaborated on the way parent-teacher meetings are held in Finland, and how schools staying at stone’s throw distance from each other in Tampere, Finland might have completely different ways of teaching children.

The 2-day event was organised by Potter’s Wheel Education Services, an organisation that was founded by Sanjay Vomkarey in 2013 and conducts teacher training programmes and holds ‘Leadership Clubs’ for nurturing life skills in students. It also organises programmes such as ‘Prabhav’, ‘Vrithi English’, etc. to impart social-behavioural and English language skills to teachers.