Say you fall ill and are admitted to a hospital. If you recover, you will be discharged and can go back home.

HYDERABAD: Say you fall ill and are admitted to a hospital. If you recover, you will be discharged and can go back home. If you have a mental illness, however, this may not be the case. Just ask the 155 people at the Institute of Mental Health in Erragadda who have spent between six to nine years in the insitute’s closed wards after being cleared by discharge. The reason is that Telangana has put little thought or resources into rehabilitating these patients, in the process, violating sections of the Mental Healthcare Act of 2017 and their Right to Life as guaranteed by the Constitution.

Mental health organisations in other parts of India have worked on rehabilitation. In the context of mental health, this includes providing the patient with occupational therapy, reintegrating them with family or helping them live independently. For instance, at the reputed Schizophrenia Research Foundation in Chennai this includes an assessment of the patient’s needs and deficits to create a treatment plan which could recommend the person return to their family, move to a residential facility, join a day care programme or be an outpatient. The IMH superintendent Dr M Umashankar, however, said that funds were not allotted separately for rehabilitation. Though IMH had a half-way home it fell into disuse and the rehab programme was abandoned. Now, if a patient’s family refuses to take them home, IMH had no way to integrate them back into society. 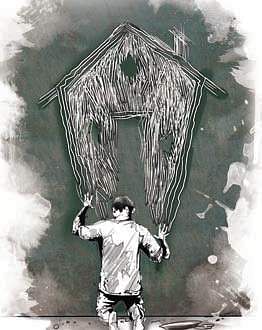 Ratnaboli Ray, founder of Anjali-Mental Health Rights Organisation in Kolkata, however argued that one must persevere, work with families and the person with mental illness. “If there is no two-way communication, reintegration or social inclusion will not be complete,” she said.

Dr KV Kishore, director of The Banyan, a Chennai-based NGO working with homeless persons with mental health issues, said lack of rehab facilities in the community made reintegration with families or society a challenge. There was a need for occupational therapists so recovered people can lead productive life.  “Besides, human resources such as social workers should be made available for rehabilitation and to integrate recovered people with families,” he said.

The Banyan has run a trial in Tamil Nadu in which 53 women from its psychiatric care home facility transitioned into living in 11 independent homes in rural and urban neighbourhoods. They were supported by health coaches or personal assistants who helped them relearn everyday skills, socialise in an attempt to enhance their participation in community life, Dr Vandana Gopikumar, co-founder of the NGO, said, adding significant gains in quality of life, social mobility and community integration were observed. Dr Gopikumar, a professor with Tata Institute of Social Sciences, offered to trial such a project with TS. "TISS and The Banyan are happy to work with the State Government to help reform the social architecture of the hospital and enable similar transitions of persons from the hospital to their families or other inclusive living options," she said.

Meanwhile, at IMH, the lack of rehab has stressed the limited staff and affected quality of care, sources said. Though IMH said it has only 450 inpatients — against 600 beds — sources said only one nurse has been allotted for the 155 patients cleared for discharge. "One nurse has to ensure that all of them brush their teeth, take bath everyday… At times, nurses take the help of the ‘fit-to-discharge’ patients to care for others," sources said. Occupational therapy was once offered at the IMH but was discontinued after the employees running it retired, close to a decade ago. After IMH was declared a Centre of Excellence, a foundation stone was laid for construction of additional buildings giving hope that rehab may be started again.

However, rehab programmes are not enough. Founder of Sruti Disability Rights Centre in Kolkata, Shampa Sengupta points out, “Different people have different needs... It’s their life, we cannot decide on their behalf. There are processes of assessment to find out what are their interest, what is their professional background. It is possible to make plans according to that,” she said. Ultimately, as Gopikumar pointed out, “if we focus on the notion of dignity as inalienable to every person, we will then learn to respond appropriately, intuitively and creatively to the needs of persons with mental illness.”