Presenting the draft political tactical line before the delegates, Karat made the majority stance clear, saying an alliance with the Congress - a bourgeois party - is not at all possible.

HYDERABAD: For perhaps the first ever time in its history, the CPM general secretary did not pilot the draft political resolution at its party congress. Instead of general secretary Sitaram Yechury, his predecessor and hawk Prakash Karat presented the draft on the first day of the 22nd party congress here. Yechury anyway doesn’t concur with the resolution, which is emphatic that there cannot and should not be any political understanding with the Congress.

Presenting the draft political tactical line before the delegates, Karat made the majority stance clear, saying an alliance with the Congress - a bourgeois party - is not at all possible. Stating that the party will take appropriate measures to unseat the BJP from power during the 2019 elections, Karat reiterated that the Left should not, however, join hands with the Congress for doing so.

The senior leader, who enjoys widespread support from the Kerala unit in his fight against Yechury, further pointed out that electoral tactics and the political line should be viewed and treated differently. There are speculations that the Karat camp will support Yechury’s bid to continue as general secretary for another term only if he is willing to let go of his alternative political line. 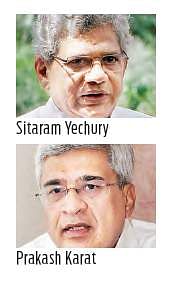 There are unconfirmed reports that Karat further instructed the delegates that Yechury’s line need not even be treated as an alternative. It should be considered only as a minority view within the party. “It seems Yechury is determined to go ahead with his political line, come what may. He seems even ready to go ahead with voting at the party congress assuming he would get an upper hand. Technically, even if he loses, he need not step down,” said a CPM state committee member Prakash Karat from Kerala.