Activists TNIE spoke to said the absence of strict rules has led to the rise in crimes against animals.

HYDERABAD: A stray dog succumbed to injuries on Wednesday after a GHMC worker dragged it by a rope down the road for half a kilometre in LB Nagar. 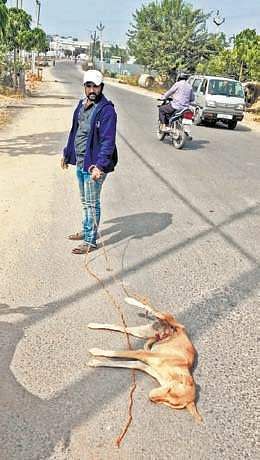 The incident came to light after Shiva Kumar, chairperson of Anti Cruelty Cell, who saw the dog being subjected to cruelty lodged a police complaint. He had freed the animal and rushed it to a vet, but the animal could not be saved.

“When I questioned the worker he said he works with the GHMC and was acting on a complaint from local colony residents that a wounded dog was lying in their colony. The worker tied the already injured dog’s right leg with a rope and dragged it for 500 meters before I finally saw him and rescued the dog,” the activist said.

“The dog was already in pain. If they could not give it treatment, they should have at least left it alone. The friction from being dragged had scraped the dog’s skin and ruptured its muscles,” he added.

Shiva who has lodged a complaint with the Meerpet Police Station is now planning to file a plaint with the LB Nagar Police Station as well. This is the second animal cruelty case to be filed in the station in the last two days. Activists TNIE spoke to said the absence of strict rules has led to the rise in crimes against animals.

Stay up to date on all the latest Hyderabad news with The New Indian Express App. Download now
(Get the news that matters from New Indian Express on WhatsApp. Click this link and hit 'Click to Subscribe'. Follow the instructions after that.)
TAGS
animal cruelty stray dog menace