‘Time Running out to save Earth’

Speaking at a conclave conducted by TNIE on occasion of World Environment Day,  environmentalists and activists deliver talks on issues that pose threat to the environment

Environmental activist, co-founder of Hyderabad RisingThe three open-air gyms in KBR National park is actually turning to be a bane for the peacocks, jackals and all the other 800 species of plants, birds, mammals and reptile species of the 390 acres of the park. Kaajal Maheshwari, environmental activist and co-founder of Hyderabad Rising - a citizen movement to save KBR said that open-air gyms have destroyed the park.

“The messages of how the park holds the various species and how it is to be conserved through the display of signages have been uprooted to place equipment for gyms,” she said. The paints, chemicals, and plastic used for the renovation of a part of the park lie unattended that would hurt the species of the park, she added. Maheshwari observed that the plants and animals are gentle, sensitive, and susceptible to changes, unlike humans who are tough and strong.

Jasveen Jairath Convenor of SOUL
Speaking on the fast disappearing water bodies in the city, Jasveen Jairath, convenor of SOUL (Save our Urban Lakes), said that the lakes are shrinking due to shoddy urban planning by the government. “The planning of the city is dictated by the real estate sector who forced the change of the 400-year-old water bodies in 50 years. There is no regulation of pumping out water and neither is there any recharge of surface water,” Jairath alleged. Speaking on the topic ‘urban water bodies - victims of state apathy and violence’, Jairath observed that the myopic view of the urban planning has caused the breaking of water channels. “Such breakage and interference have caused a 400-year tested mechanism of conserving water to rupture causing inundation of cities,” Jairath said.

Sashikant Khaja Founder of Rewheel Eco Solutions
Calling for people to take individual responsibility to be environmentally friendly, a social entrepreneur has called for the use of cotton bags. Sashikant Khaja, the founder of Rewheel Eco Solutions, deliberating on the topic ‘recycling: the most sustainable solution to pollution’ said it is no surprise that a plastic bag littered on a highway ends up in a thick forest. He drew parallels of how plastic affected the existence of wildlife by giving examples of how a cow was found to have 67 kg of plastic in its stomach. “We carry our smartphones to washrooms, then why should not we carry our own bags to shopping centres,” he questioned. Khaja also stressed that NGOs who advocate causes involving individual transformation should not scare people.

P Ravishankar
Head - Projects Planning, Control & Contracts, L&T Metrorail, Hyderabad
The Hyderabad metro rail may be old by months but the planning that went into its creation, especially, in being environment-friendly and conserving and utilising available energy is sure to turn eyeballs towards it. Explaining the various engineering mechanisms that went into its creation, P Ravishankar, Head - Projects Planning, Control & Contracts, L&T Metrorail, Hyderabad said that all the stations were created on humps. “The stations are created in a such a way that there are humps at all of the stations across the 72-km elevated corridor. Such engineering helps for automatic deceleration and acceleration of the metro both when it starts and stops near the metro,” he said. He deliberated on the topic ‘how a mass transport system like Hyderabad Metro Rail can reduce pollution’ and called for its use as there would be less vehicular snarls. 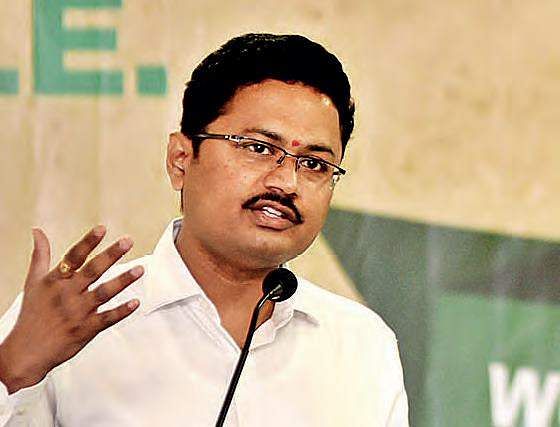 One of the major reasons  behind global warming is the carbon emissions by thermal power plants  and hence there is a need for satisfying the increasing power demand by  provision of power through renewable sources of energy rather than  increasing coal-based power plants, pointed out Dr Rajkiran V Bilolikar,  Associate Professor, Energy area, Administrative Staff College of India, speaking on  the topic ‘Energy scenario and importance of enrgy conservation in view of climate change’.

In all the various practices that have come to be in protecting the environment, the best way to do so is by following the Indian culture, he said. “Take, for instance, the vastu practices. The coming of sun rays through a particular area and the placing of kitchen or trees in a home help in promoting sustainable practices,” Rao added.

Dr K Srinivasa Raju
Professor of  Civil Engineering at BITS Pilani-Hyderabad
Hyderabad’s infrastructure, mainly the storm water drains need to be  improved significantly, keeping in mind fact that the intensity of urban flooding is most likely to increase in future, with rise in short  duration-high intensity rainfalls in the city, as predicted by various  Global Climatic Models (GCM), which are computerised simulations of change in global climate based on various parameters, said Professor of Civil Engineering at BITS Pilani-Hyderabad campus, Dr K Srinivasa Raju, along with his PhD scholars has been working on climate change and urban flooding in Hyderabad. As per the GCMs, it is possible that Hyderabad might experience intense rainfalls, as high as 578.38 mm in a span of 24 hours in 2020 and 693 mm in 2040, causing flooding of close to 460 nodes of storm water drains.

Dr Gangagni Rao A
Senior Principal Scientist at Indian Institute of Chemical Technology
Consider this, if 250 kg organic waste can generate as much biogas as a 14 kg LPG cylinder would, then how much gas would about 5,000 tonnes of municipal solid waste that Hyderabad generates on a daily basis, can generate? This was question posed by Senior Principal Scientist at IICT, Dr Gangagni Rao A, raised in his talk on the topic  ‘Decentralised waste management under Swachh Bharat Abhiyan:  Remunerative Technological Options’. Dr Rao said that LPG  consumption in the country can be reduced by 5%, saving almost Rs 600 crore for the exchequer, if the millions of tonnes of organic waste generated daily by cities across India is turned into biogas. Dr Rao said it is essential that methodology of solid waste management be decentralised and segregation of waste at source be followed.

Dr Manoranjan  Bhanja
PCCF-Wildlife(Retd) and Advisor,  Environment Protection, Training and Research Institute
Telangana forest department is on a mission of rejuvenating tracts of forest in the State which have been lost to deforestation over the years, said Principal Chief Conservator of Forests-Wildlife(Retd) and Advisor, EPTRI, Dr Manoranjan Bhanja. Speaking on ‘Rehabilitation and restoration of  degraded forest ecosystem in Telangana State’, Dr Bhanja said that the challenge lies in rejuvenating 36.12% of the State’s 26,903 sq km of forest area, that falls under the category of scrub and non-forest, which is basically area recognised as a forest but on ground no forest  exists due to human activities. He said that such forest areas have been colonised  by alien plants, which need to be destroyed. Moreover, new saplings need to be planted, because such forest areas do not have mother trees that can generate seeds which can fall on forest floor for  natural growth of vegetation.

P Raghuveer
Principal Chief Conservator of Forests, Telangana Forest Department
There exist several welfare organisations, be it in local colonies, gated communities or the apartments that one resides in. But despite such massive presence of welfare communities, many do not work for community development. P Raghuveer, Principal Chief Conservator of Forests, Telangana Forest Department observed that many have failed to take the responsibility to serve the community. “According to the recent Panchayat Raj guidelines everyone person is meant to work for five hours for community. Such practices are a punishment given to people in foreign countries. People should take up community social responsibility at their welfare organisations,” Raghuveer pointed. Change will happen when a lot of questions are asked and such energy of citizen awareness is lacking in Hyderabad, he said.

Stay up to date on all the latest Hyderabad news with The New Indian Express App. Download now
(Get the news that matters from New Indian Express on WhatsApp. Click this link and hit 'Click to Subscribe'. Follow the instructions after that.)
TAGS
KBR National park World Environment Day