Love Vietnamese food? This mobile game is for you

TET, which will be launched next year, is named after Vietnamese New Year.

HYDERABAD: When we think about the popular mobile games in India, racing, cricket and battlegrounds come to mind. That is why, when they talk about a cooking game, it has your attention. 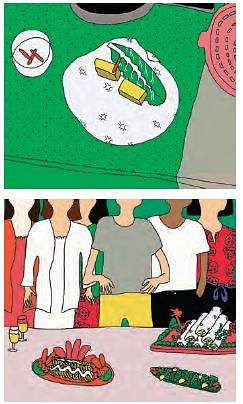 Charlotte Broccard, a Swiss illustrator and interaction designer, who was recently in the city to conduct a workshop in IIT Hyderabad, has designed a game, TET, that will make you an expert on Vietnamese cuisine. The game, which will be launched next year, is named after Vietnamese New Year.

Charlotte says: “I have a Swiss dad and a Vietnamese mother. I created this game to acknowledge my Vietnamese heritage. I realised that with every generation, some of the traditional wisdom is lost. So I went to my grandmother’s place in Paris and learned traditional recipes. I talked to her, noticed how she works and decided to develop a game.”

The 26-year-old has worked on and off on the game for the last two years.

She adds: “My colleague, Etienne Frank, helped me develop TET. It is made of many mini-games, each one of which is a step in the recipe. The steps may involve cutting vegetables, sauteing vegetables etc. Right now, we have included recipes for spring roll, and banana with tapioca and coconut milk.”

Talking about her workshop in IIT, the illustrator says: “I found that the participants were motivated to learn new things. I introduced a software named Unity to them, which helps in developing games.”
“I asked the participants to develop their own cooking games and they came out with interesting ideas to make Indian dishes,” she adds.

An avid illustrator, Charlotte likes to draw inspiration from her surroundings.

Did she come across any inspiring idea in Hyderabad? “Yes! I was fascinated by the turban of the man who opened the door for me at my hotel. I even made an illustration on it!” On the Indian gaming industry, she says: “My game is experimental in nature, but I realised that Indians do not play these games much. Also, they are more likely to play games which are available for free. In future, I am looking forward to develop games that will help people address health issues.”

Now we are on Telegram too. Follow us for updates
TAGS
Charlotte Broccard IIT Hyderabad TET video game