A majority of street vendors are exposing themselves to serious hazard conditions while most of them do not have a health or life insurance coverage.

HYDERABAD:  A majority of street vendors are exposing themselves to serious hazard conditions while most of them do not have a health or life insurance coverage. A study titled ‘Occupational Health and Safety of Street Vendors of Delhi and Hyderabad: A Case for Universal Health Coverage’ conducted by the University of Hyderabad (UoH) by a student Masters of Public Health highlighted that 81.3 per cent of street vendors in the city do not use protective gear. While at least 57.3 per cent have had musculoskeletal ailments which affect the conditions of muscles, bones, and joints. 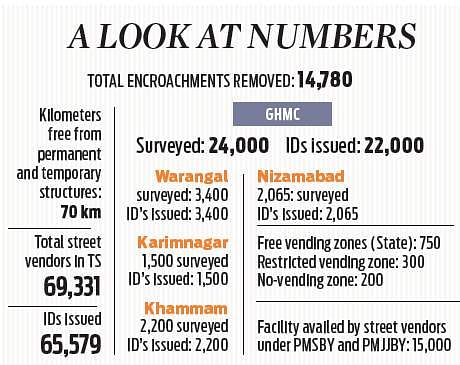 This is an alarming condition considering the huge population that thrives off of the city streets. Though the MEPMA has identified 69,331 street vendors, there are several thousand who are yet to be formalised.
As per MEPMA figures, only 15,000 are insured under the Pradhan Mantri Suraksha Bhima Yojna (PMSBY) and Pradhan Mantri Jeevan Jyothi Bhima Yojna (PMJJMY) schemes combined. The insurance gives `2 lakh cover.

With a sample size of 300, the study highlighted that about 50 per cent were insured under the Arogyasri health insurance scheme. The study also brought to light that there was a lack of drinking water facility, toilets and inadequate infrastructure to enable street vendors conduct their business.

Stay up to date on all the latest Hyderabad news with The New Indian Express App. Download now
TAGS
street vendors hyderabad