Singapore was a distant second when it came to our data’s destination.

HYDERABAD: Indian mobile apps ask for 45 per cent more permissions than global apps, which indirectly means that homegrown apps access much more of our personal data when compared to apps made in other countries, a study released on Tuesday said.

A study — “State of Data Privacy of Mobile Apps From India 2018” — conducted by Arrka Consultancy tested 50 global Android apps and compared the data accessed with those by country-made apps.“In categories like travel booking, shopping and mobile wallets, the difference is particularly striking with Indian apps taking 1.6 to 1.8 times more number of permissions,” the study said.

That raises the question, what happens to the data that are accessed by the home-made apps? As much as 99 per cent of apps that were studied were found to be sending data across the borders.“Not surprisingly, the USA is the primary destination of all the data being transferred outside India with more than 81 to 97 per cent of the traffic being directed there.”

Singapore was a distant second when it came to our data’s destination. Other countries include France, Russia and Tanzania. The destinations of the data included advertising companies, those in analytics, app development, authentication, social media and trackers.

Google was found to be where the highest percentage of traffic was headed out to and Facebook came a distant second with a presence across all three channels studied (9 to 14%). The study also observed that ‘some third parties were channel specific’ that is Microsoft was primarily seen on websites whereas Amazon was primarily seen in mobile apps’.

The report also analysed the data access in iOS Apps and compared it with those by Android. While 60 per cent of permissions were similarly accessed by both, “Permissions like microphone, camera and calendar were accessed 1.3x-1.4x  more by iOS Apps as compared to their Android versions.” 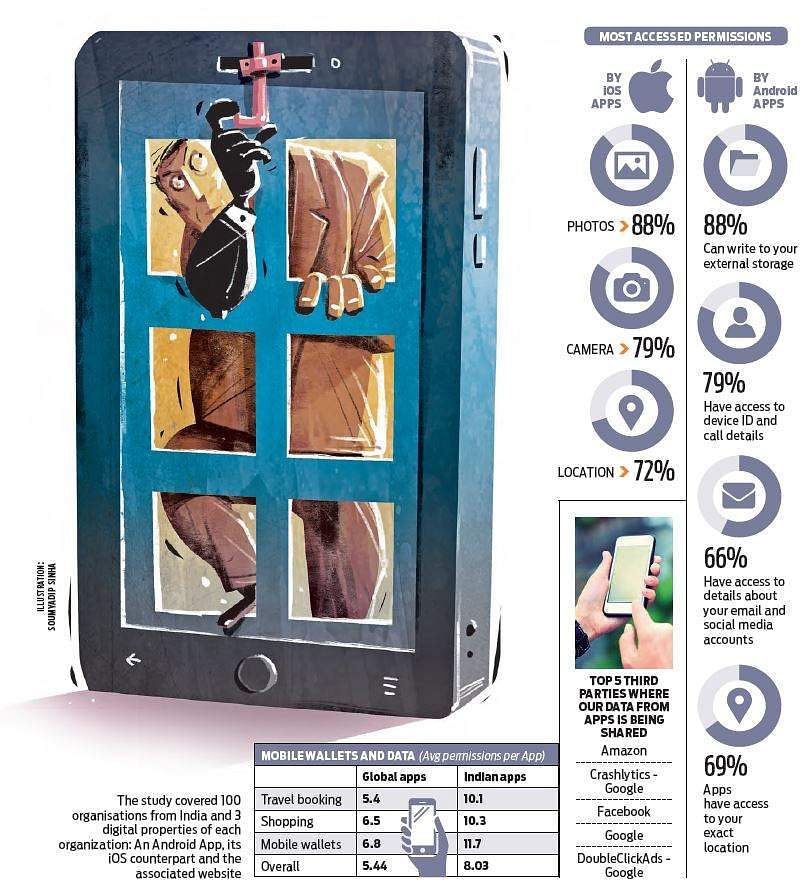 Now we are on Telegram too. Follow us for updates
TAGS
Indian mobile apps personal data Mobile Apps Data Privacy