Various NGOs are including communities for cleaning Shaikpet Kotha Cheruvu

HYDERABAD : lessed are the people who are living beside a lake in these packed urban spaces. But what if that lake is gradually becoming a cesspool of garbage? This is what has triggered people of Shaikpet to come together to save the lake, Shaikpet Kotha Cheruvu. Under the banner of ‘Let’s Save The Lakes’, three NGOs, Kriti social initiatives, Udayan Care and Ananda Foundation started a year-long drive to clean and rejuvenate this lake.

As part of this they are working with Druvansh, an NGO in Hyderabad, known for its work related to environment. Kriti and Udayan foundations work mostly for education and women empowerment in Shaikpet and Film Nagar slums. But this environmental initiative is one step further for them in ensuring a clean and safe environment for these communities. Also the trustee of Ananda Foundation Seetha Anand Vaidyam has been fighting for the conservation of this waterbody for years. They all came together with a common goal of saving this lake. 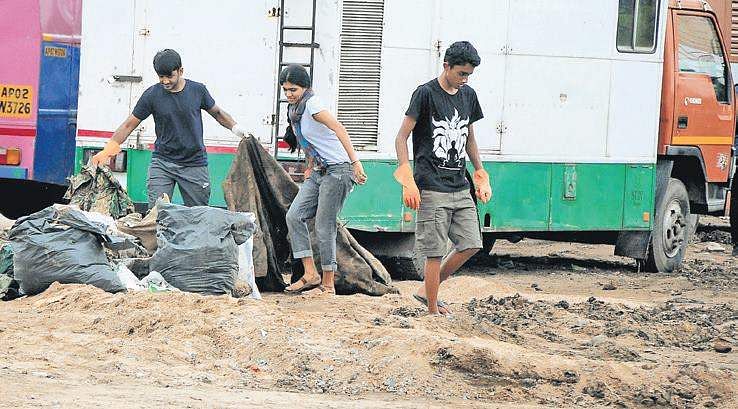 The drive
The lake cleanup drive saw several people participate, ranging from students to senior citizens. This year-long drive involves community awareness, plantation and water treatment. “I don’t want to call it as community awareness but it is more a community treatment. We are sending volunteers to the homes of these communities to understand their problems and why they are dumping their garbage into the lake. in the initial period, we are concentrating on bringing the community together and later we will try to involve government,” said Madhulika Choudary founder of Dhruvansh. One of the participants Richard Saldanha, 75 said, “I think it is the time, we should take ownership of our environment. Community awareness is fundamental and this is an immediate crisis we need to act upon.”

Once called as a City of Lakes, Hyderabad is now among 21 cities that run out of groundwater by 2020. The city had around 3,000 lakes in 1970 but it is left with 185 lakes today. Rampant urbanisation causing encroachment of lake beds in the name of construction and development projects are responsible factors. Release of sewage and industrial waste into lakes contaminates the groundwater damaging them beyond their regenerative capacity. Lakes and water bodies are the primary source of drinking water but with the disappearing of lakes, the city is now dependent on the water drawn from Krishna and Godavari.

More action
There are various NGOs in Hyderabad who are working for the conservation of lakes and water bodies. These NGOs are instrumental in bringing civil society together and putting pressure on the government to act on the same. They are championing this cause of conservation of lakes and proposing various sustainable methods to do it and also creating awareness among communities to adopt these methods. SAHE (Society for Advancement of Human Endeavour) foundation is one such organisation which is known for its “Live for lakes” and revival of Kudi Kunta Lake in Kondapur.

Kalpana Ramesh from SAHE says, “The only sustainable solution for clean water bodies is Communities awareness. With community action we can adopt good practices like connecting rooftop water to lakes, undoing illegal sewage dumping into lakes and bringing back biodiversity. recently a Fortune Nest apartment of Kondapur plugged their illegal sewerage line into the lake and reconnecting to legal Under Ground Drainage lines because of our rigorous awareness which has been a remarkable win for us. Dhruvansh is another NGO which has rejuvenated Neknampura lake and provide sustainable water treatment for contaminated water bodies. They have created India’s largest Floating Treatment Island on Neknampura lake in Kondapur and looking forward to rejuvenating Shaikpet Kotha Cheruvu.

Some facts
According to the recent reports, 40 per cent of Indian population will have no access to drinking water by 2030. Chennai is facing its worst water crisis because of the dried up lakes, that situation is going to be the same for cities like Hyderabad and Banglore unless all the stakeholders work together for a sustainable and safe future.